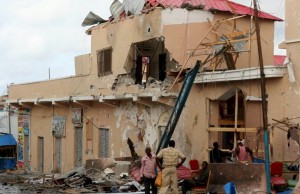 A drone strike in south-central Somalia, a strategic stronghold of the Islamist group Al-Shabab, destroyed a vehicle belonging to the militants in the early hours of Thursday, residents and officials said.

The car, which was believed to be carrying militants, was hit just outside the town of Bardere, which Shabab captured from government forces in 2009 and has controlled ever since.

Somali forces and the African Union-led peacekeeping force, known as AMISOM, have been advancing on the area over the past three days, officials say.

Al-Qaeda-linked Shabab, which wants to topple the Western-backed government and impose its strict interpretation of Islam on Somalia, has been driven out of major strongholds by the African and Somali forces but continues to launch bomb and gun attacks against officials, politicians and others.