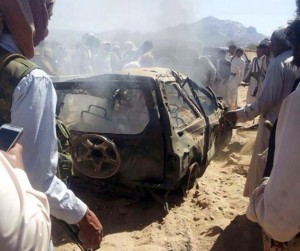 “A drone targeted a house where Al-Qaeda militants were gathered for a meeting, destroying it and killing all five inside” late on Wednesday, said the local official, who asked to remain anonymous.

The United States is the only country known to operate armed drones over Yemen, and strikes on militants have continued during months of fighting between pro-government forces and Iran-backed Shiite rebels.

Al-Qaeda in the Arabian Peninsula (AQAP), viewed by Washington as the network’s most dangerous branch, has taken advantage of the chaos to seize Mukalla, capital of the vast desert province of Hadramawt.

Four other suspected Al-Qaeda militants were killed in a similar raid on Saturday in Mukalla.

The group said in June that its leader in Yemen, Nasir al-Wuhayshi, had been killed in a drone strike.

Officials said this week that the militants had deployed in force across Mukalla in anticipation of a possible operation by the Saudi-led military coalition to help government loyalists retake the provincial capital.

The coalition of Arab states has been carrying out air strikes against the pro-Iranian Huthi rebels in Yemen since March, but has so far not intervened against Al-Qaeda.