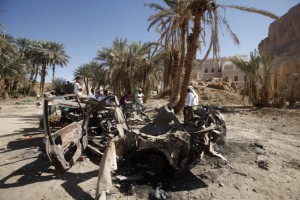 A drone attack believed to have been carried out by US forces killed three Al-Qaeda members travelling in a car in southeast Yemen, security and tribal sources said Saturday.

A local security official said they were Al-Qaeda fighters.

The United States is the only country known to operate armed drones over Yemen.

It has kept up strikes on militants during months of fighting between pro-government forces and Shiite Huthi rebels who control the capital.

Amnesty International charged Friday that the Saudi-led coalition backing the Yemeni government had renewed its use of cluster bombs during a January air strikes on Sanaa that killed a 16-year-old boy.

The coalition has denied using such ammunition in its anti-Huthi attacks on the Yemeni capital.

Yemen has been convulsed by unrest since the Huthis seized Sanaa in September 2015.

Al-Qaeda’s local affiliate has exploited the turmoil to tighten its grip on parts of southeast Yemen, including Mukalla, capital of Hadramawt province.

Al-Qaeda in the Arabian Peninsula and the Islamic State jihadist group have also established a foothold in and around the country’s main southern city of Aden.

Late on Friday, unknown gunmen shot dead a police officer as he returned home in Aden, police said, in the latest in a string of such attacks in the city.