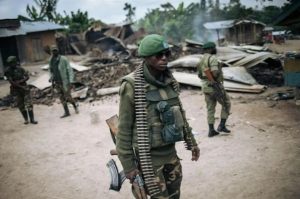 DR Congo’s army said Tuesday its troops have killed 22 rebels since May 6 when it launched an offensive against the notorious ADF militia in the restive east of the country, like reported by yahoo.com.

A historically Ugandan Islamist group, the Allied Democratic Forces is the bloodiest of scores of armed militias that roam the mineral-rich zone, many of them a legacy of two regional wars from 1996 to 2003.

He said the army arrested 60 ADF collaborators including about a dozen foreigners, mainly Ugandans.

The ADF — which the United States brands a “terrorist” organisation” affiliated to Islamic State group — has been accused of murdering more than 1,000 civilians since November 2019 in and around the major city of Beni in North Kivu province.

“We have the support of the people, a population that is sick of the lack of security and wants peace to return,” Lieutenant Mualushayi said.

The government of DR Congo President Felix Tshisekedi placed North Kivu and neighbouring Ituri province under a 30-day “state of siege” on May 6.

The move is allowed under the former Belgian colony’s constitution “if severe circumstances immediately threaten the independence or integrity of the national territory, or if they interrupt the regular functioning of institutions”.

The army of the vast central African country has conducted operations against the ADF since October 2019, but has been unable to put a stop to the massacres.

The army itself is regularly accused of excesses including exactions against civilians.