You are here: Home / MidEastGulf / Dozens of ISIS leaders escape from Iraq to Syria 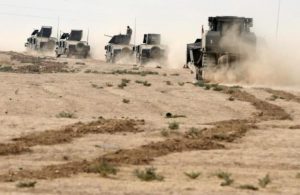 Several ISIS commanders and their families are escaping from Mosul through Tal Afar and al-Baaj to Syria after managing to break the siege imposed by militias of Popular Mobilization Forces (PMF) around Tal Afar, like reported by aawsat.com .

Sheikh of al-Shammar Tribe had confirmed that ISIS caliphate Abu Baker al-Baghdadi was injured after the coalition’s raid on Tal Afar while he was still inside the town.

Media Official of the Patriotic Union of Kurdistan (PUK) in Mosul, Ghyath al-Surji told Asharq Al-Awsat that ISIS militants launched an extensive attack on PMF front lines to the west of Tal Afar. Using armored vehicles, tanks, and bombed cars, and after six continuous hours of battling, ISIS was able to break siege and open a passage towards Baaj.

According to Surji, during the night, dozens of cars carrying ISIS leaders and their families escaped on the road dug by the militants from Tal Afar to Syria, through Baaj.

The convoy was led by Iraqi national Abu Jannat, Baghdadi’s deputy, and was on a mission to accompany Baghdadi himself and several leaders and their families. Yet, Iraqi Air Force attacked them near al-Houl area where all but two cars were completely destroyed.

Jarba told Asharq Al-Awsat that during the air strike, Abu Jannat was killed along with head of security in Tal Afar, Zeid al-Afari.

According to information retrieved by the sheikh, Afari was one of the most prominent militants in ISIS and he was buried in Baaj, a day after the air strike.

Jarba confirmed that Baghdadi was injured during a coalition air raid in Tal Afar, almost ten days ago, and that was why he hadn’t been able to leave the city.

He added that ISIS militants are escaping daily from Baaj and nearby areas towards Syrian territory. He also stated that ISIS is murdering any civilian who tries to escape from the occupied right coast of the city towards the liberated left coast. Over 50 young men from Mosul had been executed by ISIS for attempting to escape.

Sheikh Jarba revealed that all of Arab families had returned to areas liberated by Peshmerga forces.

Based on directives of the President of Kurdistan Region Masoud Barzani, a brigade of Arab volunteers has been formed as part of the elite Peshmerga force, to protect their areas. Jarba said that on February 07, the first batch of volunteers graduated and it included 1,000 fighters who would form al-Jazira Brigade.

A resident in Mosul told Asharq Al-Awsat over the phone that the situation is getting worse on the right coast of Mosul, cautioning that the area may be on the brink of a humanitarian disaster if Iraqi Forces are late to liberate it.