You are here: Home / MidEastGulf / Dozens of Hashd al-Shaabi fighters, Islamic State militants killed as clash breaks out in Hawija 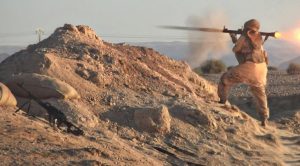 Heavy armed clashes broke out between the Iraqi forces and Islamic State (IS) insurgents near Hawija district, southwest of Kirkuk province, a source said to basnews.com.

At least 20 IS jihadists were reportedly killed with 15 others trapped in al-Saadiya village in Hawija, as reported by Shafaq News.

The source also said that several Hashd al-Shaabi militiamen were killed as a result of the confrontation, however, the number remains unknown.

The areas around Hawija are still a hub for the remaining IS jihadists and group’s sleeper cells.

Hawija was declared fully liberated from the grip of Islamic State earlier in October 2017. However, the jihadist group maintains a presence in the area and continues to attack the Iraqi forces from time to time.