You are here: Home / West Asia / Dozens of Daesh militants killed in Afghanistan 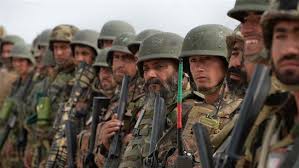 At least 39 Daesh members have been killed in separate mop-up operations by Afghan security forces backed by military aircraft in the country’s eastern province of Nangarhar.

Attaullah Khogyani, the spokesman for the provincial governor, said on Sunday that six Daesh members were killed as Afghan fighter jets launched an operation in the Achin district of the beleaguered province, east of the capital, Kabul, the previous night.

Earlier on Saturday, 33 Daesh extremists were killed and four others injured during an Afghan army ground offensive in the same district of Nangarhar Province.

Haji Ghalib Mujahid, the governor of Achin, said early last month that 32 Daesh fighters had been slain in the area during a counter-terror operation. Ghalib said a radio base used by Daesh elements in Afghanistan to be in touch with fellow militants in Iraq and neighboring Syria was also destroyed in the operation.

Nangarhar has been witnessing a rise in the number of Daesh militants in some of its districts in recent months.

Afghanistan is gripped by insecurity 14 years after the United States and its allies attacked the country as part of Washington’s so-called war on terror. Although the 2001 attack overthrew the Taliban, many areas across Afghanistan still face violence and insecurity.