You are here: Home / Mediterranean / Dozens killed in attack on ISIS in Libya 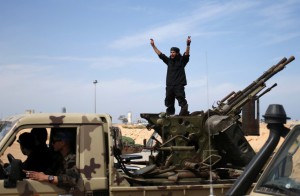 Dozens of fighters from ISIS were killed in Libya as militiamen sought to dislodge them from a neighbourhood in the eastern city of Derna, Libyan news agency Lana reported.

For more than a week now, fighters belonging to a group known as the Mujahedeen Council of Derna have been attacking elements of the radical Sunni Muslim group in the city.

“Armed men” were trying Saturday morning to drive ISIS forces out of Derna’s eastern district of Fataeh, Lana said, and “there were dozens of deaths in the ISIS ranks.”

Lana, with links to the militia-backed government in Tripoli that is not recognized by the international community, said Fataeh was “ISIS’ last bastion in Derna,” suggesting that the group’s fighters had been driven out of the rest of the city.

ISIS has had a significant presence in Derna since the end of 2014.

Libya descended into chaos after a revolt unseated longtime dictator Moammar Gadhafi in 2011. It now has rival governments and parliaments, as well as powerful militias battling for influence and a share of its oil wealth.