You are here: Home / Africa / Dozens killed in al Shabaab fighting in Somalia, attacks in capital 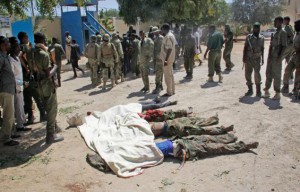 Fighting in south Somalia between al Shabaab militants and government forces killed at least 24 people, while a rebel attack in the capital killed three Transport Ministry workers and a lawmaker, officials and the group said on Saturday.

Al Shabaab launched an attack on government troops late on Friday in the Awdigle district and Mubarak village in the Lower Shabelle region, south of the capital Mogadishu. Clashes lasted until early Saturday and killed at least two dozen people, residents said.

In two gun attacks in the capital, the group, which wants to topple the Western-backed government, killed three people working for the Transport Ministry and in another assault shot dead a lawmaker, police and a parliamentarian said.

Al Shabaab said it was behind the attacks in the south and in Mogagishu. “We shall continue killing the enemies,” Sheikh Abdiasis Abu Musab, al Shabaab’s military operations spokesman, told Reuters.

“We did not sleep last night because they exchanged shells and gunfire throughout the night,” resident Afrah Hussein told Reuters from Awdigle district, adding he had counted 17 dead but could not say if they were soldiers or militants.

In Mubarak, a resident saw seven killed from both sides.

In the attack in Mogadishu, police said the three Transport Ministry workers were killed when al Shabaab gunmen blocked their car and sprayed them with bullets.

Separately, one lawmaker was killed and another was wounded in Mogadishu when the militant group used a similar tactic.

Although diplomats say al Shabaab has been pushed mainly into areas in the Galgala hills in the north and Juba Valley in the south, the group has continued to launch strikes in the capital Mogadishu and on Somali and AMISOM forces.