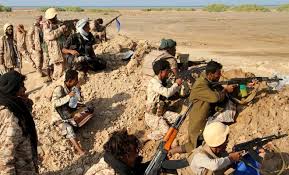 Since Monday, fighters aligned with Yemen’s internationally recognized President Abed Rabbo Mansour Hadi have been making advances and seizing more territory from Yemen’s Houthi rebels, the officials said. Warplanes from the Saudi-led coalition provided air cover for Hadi’s forces, they said, speaking on condition of anonymity because they were not authorized to speak to the media.

The battles are part of the so-called Golden Spear operation launched by the coalition and Hadi’s government and aimed at uprooting Houthis and allied forces from the western coast, starting from the strait of Bab al-Mandab and extending to the vital Red Sea ports of Mokha and Hodeida. The coalition accuses Houthis of using these ports to receive supplies of arms and ammunition from Iran.

Fadl Hassan, commander of the 4th Military District, told The Associated Press that an advanced phase of the operation would be the liberation of the embattled city of Taiz, which is divided between Houthi rebels and pro-Hadi forces.

The war in Yemen is entering its second year after Houthis seized the capital Sanaa and forced Hadi to flee the country. The Saudi-led coalition has waged an extensive air campaign since March 2015 aimed at restoring Hadi’s government. The northern region remains under Houthi control.

In Sanaa, officials and witnesses said that two airstrikes hit a gas station near a school in the Nihm district outside Sanaa, the capital. The airstrikes killed at least six civilians including children. They said that the school itself wasn’t targeted in Tuesday’s airstrikes.

Meritxell Relaño, the UNICEF representative in Yemen, condemned the attacks, saying that one child was confirmed dead and four others were wounded.

The coalition has come under heavy criticism by international rights groups for carrying out attacks against civilians including schools, markets, hospitals and residential areas. More than 4,200 civilians have been killed and the fighting has left more than three million people displaced.

Relaño said in a Wednesday statement that a total 1,400 children have been killed and more than 2,140 wounded since the war started. She said about 1,400 of them had been recruited by the warring parties. Over 2,000 schools are no longer being used because they were destroyed, used as shelters for the displaced or occupied by fighters and used for military purposes.

“Schools have to be zones of peace at all times, a sanctuary where children can learn, grow, play and be safe. Children should never risk their lives only to attend school,” she said.