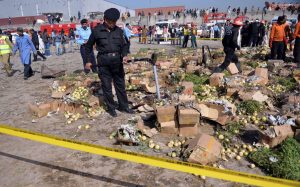 At least 31 people were killed and 50 wounded when a bomb hidden in a carton of vegetables ripped through a crowded marketplace in Pakistan’s restive northwestern tribal region Friday, officials said.

“According to our initial investigation, it was an improvised explosive device hidden in a carton of vegetables,” he said.

Another senior official, Ameen Ullah, said 31 people had been killed, including 22 Shiites.