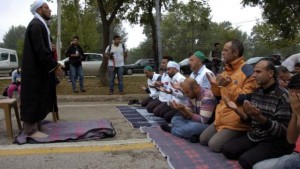 A Syrian refugee who led the feas of sacrifice prayer near Turkey’s border with the European Union has preached to his compatriots that they should not go to Europe.
“Don’t go to Europe. When did they become brothers and sisters to Muslims? Have they ever helped us? On the contrary, they have occupied our country” Syrian citizen İlyas Ahmet told a group of refugees during the Eid prayer in the northwestern Turkish town of Edirne on Sept. 24.

Hundreds of Syrian refugees have been camping in Edirne’s historic Sarayiçi neighborhood for the past 10 days, waiting for Turkish authorities to let them go to the border with Greece and Bulgaria. The Turkish government refused to allow the refugees to continue, noting a permit can be issued only if EU countries agree to take them.

Some 400 refugees returned to Istanbul late Sept. 23, decreasing the number in Edirne to around 500. Some 50 among the refugees who stayed in Edirne attended the Eid prayer on Sept. 24. Some of them were weeping during the prayer, local reports said.