You are here: Home / Europe / Does this man look like a refugee or a terrorist to you?

A migrant trying to claim asylum has been unmasked as a suspected terrorist – after he was caught posing a shocking weapons stash. 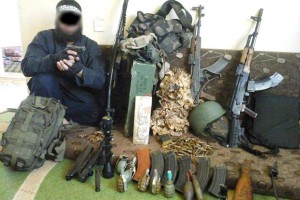 A 34-year-old man who arrived in Europe with his family claiming to be a Syrian refugee has been arrested on suspicion of plotting to massacre civilians.

Police uncovered a photo of the suspect – now believed to be an Algerian terrorist – clutching a pistol and posing with grenades, machine guns, ammo cartridges, a helmet, military-style webbing and a backpack.

The suspected ISIS terrorist and his wife were among three people arrested as 450 heavily-armed police raided properties – including two refugee centres.

The arrested couple reportedly arrived in Germany claiming to be fleeing Syria’s bloody civil war at the end of 2015.

The third suspect – a man – was arrested over fake identification documents.

Experts say Germany is long overdue a terrorist attack due to its support for military operations against Islamic State – also known as Daesh – in Iraq and Syria.