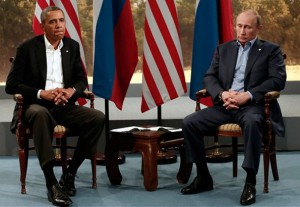 It is a matter of deep concern that the strategic propositions recently put forth by the five permanent members of the United Nations Security Council (UNSC) at the UN General Assembly during the 70th anniversary of the failing world body had no solutions to offer either on the growing influence of the ISIS on global dynamics or on long-term stability of countries like Syria, Iraq, Yemen and Libya.

In their respective address on the occasion, neither Russian President Vladimir Putin nor US President Barack Obama had anything to offer as a long-term strategy to counter the accelerating influence of terror groups that have acquired dangerous intra-religious dimensions. The contending superpowers have shown precious little convergence on a short or long-term control strategy. They have only offered post-facto justification to their ongoing positions.

Speaking shortly after Obama dismissed Russia’s view that Syria’s Bashar al-Assad can be a partner in fighting ISIS, Putin, making his first address to the General Assembly in a decade, blamed foreign (read US) interference for helping the spread of extremism in the Middle East. “Rather than bringing about reforms, an aggressive foreign interference has resulted in the brazen destruction of institutions,” he said.

The Russian president has ordered a major bombing campaign against the ISIS to aid the forces of Syrian President Bashar al-Assad, undermining the cornerstone of the American war effort to prop up so-called ‘moderate’ rebels. In effect, Moscow’s air strikes were a message to Washington: If you want to get rid of Assad—or build a force that can take on ISIS—you’re going to have to deal with Russia.

In retaliation, Obama has said that any bid by Russia and Iran to prop up Assad and try to pacify the population is only going to get them stuck in a quagmire, and it won’t work. Moscow’s strategy, he said, was a self-defeating exercise which would strengthen ISIS, drive the moderate opposition underground and further complicate any hopes of a political settlement.

Putin, in fact, blamed the US policy in the Middle East for the crisis. He candidly brought out that the 2003 military occupation of Iraq was the actual cause of the engendering and creation of the ISIS.

Closer home, the lack of a cohesive global approach to terrorism in South Asia should be a cause of concern. Here also, the US-led war against global terror is riddled by a fault-line in that it treats the perpetrators in terror Pakistan with the victim of cross-border terrorism like India similarly. The US and its allies have consistently turned a blind eye to Pakistan’s support to cross-border terror outfits operating from its soil. They have also tended to ignore the fact that the master planners of ISIS strategies are hunting for vulnerable areas for their future expansion. The availability of ‘friendly territory’ in Pakistan provides them a strategic launching pad for operations to sustain an Asian chapter of the ISIS.

There is a real possibility of convergence of interests between the likes of Hafiz Saeed and the ISIS, with Pakistani intelligence elements acting as the link. It is high time New Delhi pressed the international community for unison of ideology and purpose to track and effectively neutralise such terrorist ideologues in a more composite manner.

Prime Minister Narendra Modi’s call to stop differentiating between ‘good terrorism and bad terrorism’ is timely in this backdrop. “At a time when we are observing the 70th anniversary of the UN, it is the world body’s responsibility to come out in clear terms who it considers a terrorist and who is on the side of humanity. Once it has to be made clear so that the world can decide which path it should follow and only then peace will prevail,” he said.

Till this is achieved, India must review its internal security apparatus and beef it up adequately to meet the challenge of cross-border terror outfits on Indian targets within the country as well as outside.

According to Western estimates, nearly 500,000 people have fled from weak and failing states and crossed the Mediterranean, aspiring to make it to countries of the European Union—the mainstream preference being Germany. The potential for recruiting innocent youths, women and children into human trafficking networks and ISIS ‘reserves’ has accentuated the situation with all the attendant dangers. These ground realities can no more be ignored in any international forum related or unrelated to the UN.

The divergence in the approach towards global war against ISIS and its variant terror outfits has given rise to the question as to whether the five permanent members of the UN Security Council lack the will or capacity to counter the challenge posed by such terrorist groups. It has also strengthened the demand by India and other emerging global powers for reforms within the UN’s system to reflect the changing world order.