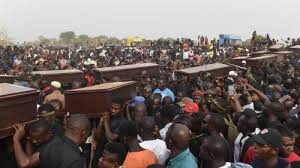 Authorities in volatile northeastern Nigeria have been encouraging thousands of people displaced by jihadist violence to return home, even as bloody attacks persist, like reported by nation.africa.

On September 27, hundreds of people came back to Baga, a fishing town on the shores of Lake Chad in Borno state, six years after it was seized by Boko Haram.

Their return came shortly after the convoy of Governor Babagana Umara Zulum was ambushed by the IS-linked Islamic State West Africa Province (ISWAP) while he was making an assessment of the area. Thirty security personnel and civilians were killed.

Jihadists have seized swathes of territory in Borno, Boko Haram’s birthplace, forcing some two million to flee their homes.

Most of the displaced have moved into squalid camps in the regional capital, Maiduguri, relying on food handouts from international charities.

Like many officials before him, Zulum has insisted that the displaced “must return” to rebuild their homes and live a “dignified” life.

Since 2018, people have returned to five major towns where they typically live behind a defensive line of trenches to fend off jihadists.

But attacks have persisted. In August, hundreds of returnees were abducted in Kukawa in the Lake Chad region — they were taken from homes to which they had just been relocated by the authorities, two years after fleeing the violence.

In Baga, some of those returning say their new existence is just as bad as in the camps.

“We returned with the anticipation of leading a normal life but we realised we were returned to a bigger camp where we still rely on the same food handouts,” Gana Ibrahim told AFP.

“We can’t go to our farms or into the bush to fetch firewood — and those who do so get killed or kidnapped by the insurgents.”

After splitting from Boko Haram in 2016, ISWAP established a presence on the islands of the marshy Lake Chad region.

The group has recently stepped up killings and abductions, ambushing military convoys and setting up highway checkpoints.

“Borno governor is bold, blunt and passionate about his people; but returning IDPs is throwing the sheep to the tiger”, Shehu Sani, a former senator, tweeted.

Sani had previously been involved in botched peace talks to end the Islamist uprising, which has claimed some 36,000 lives over the last decade.

In recent weeks, the Nigerian military have carried out air raids on the group’s hideouts, leaving scores of insurgents dead, security sources told AFP. The military, for their part, say they killed 450 fighters between June to September in ground operations and air strikes.

Against this background, the resettlement “couldn’t have come at a worse time”, a security source told AFP.

“The insurgents are angry over their losses to the military in recent raids and will hit back hard,” said another source.

Last month, ISWAP chased out dozens of fishermen from Garin Mata village outside Baga, warning them never to come back.

“They vowed to kill anyone who returns,” fisherman Labo Mamman told AFP.
“There are around 600 well-armed fighters who are now occupying the village,” said Mamman, who was among those chased out.

Despite official denials, most of the Lake Chad area is under ISWAP control.

Zulum has been attacked three times, escaping unhurt and vowing to end the jihadist violence and return all IDPs to their homes in northern Borno.

The insurgents meanwhile are determined to thwart such a move.

“The IDPs are caught in between these egos and they are likely to be the frontline victims,” said a security source.

Last week, Zulum called on the Nigerian government to invite Chadian troops to assist in fighting the jihadists “if any meaningful success is to be recorded on the battleground.”

Chad is part of a regional military coalition comprising Nigeria, Cameroon and Niger, fighting the jihadists.

In January, around 2,000 Chadian soldiers left the Lake Chad area at the end of a nine-month joint military operation with Nigerian troops. There has been a marked increase in jihadist attacks since then.

For Bello Salihu who was displaced from Baga and lives in a camp in Maiduguri, the return of the Chadian troops brings some hope.

“I’m monitoring the situation in Baga from here but I’ll return as soon as the Chadian troops arrive because I know how they secured the area last year,” Salihu said.