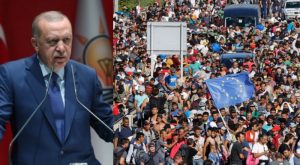 Turkey’s president Recep Tayyip Erdogan has threatened to send “millions” of Syrian refugees to Europe in response to criticism of his military offensive into Kurdish-controlled northern Syria, like reported by telegraph.co.uk.

Speaking to the Turkish parliament on the second day of a Turkish incursion into Syria, Mr Erdogan said he would “open the doors” to spark a new refugee crisis if European Union countries classified the attack as an “invasion.”

“Hey EU, wake up. I say it again: if you try to frame our operation there as an invasion, our task is simple: we will open the doors and send 3.6 million migrants to you,” he said.

The comments came as a Syrian human rights group said up to 100,000 civilians have been displaced by fighting since Turkey launched its offensive with shelling and airstrikes against Kurdish strong points and cities on Wednesday afternoon.

Large convoys of civilian cars were still heading south towards the cities of Hasekah and Tel Temir in a bid to flee the fighting on Thursday morning.

Turkey, which says it wants to create a “safe zone” on the Syrian side of the border, said it had seized all its designated objective for the first day and that the operation continued to go as planned.

“Our heroic commandos taking part in Operation Peace Spring are continuing to advance east of the Euphrates (river),” the Defence Ministry wrote on Twitter. “The designated targets were seized,” it said in a later statement.

The Kurdish-led Syrian Democratic Forces said they had repulsed a Turkish attack on the city of Tel Abyad and said claims Turkey had made any advance east the the Euphrates were false.

A spokesman for the National Army, a Turkish-backed Syrian rebel group, said its fighters were moving towards both cities in support of the Turkish army, but denied SDF reports of heavy clashes near Tel Abyad.

Witnesses said there was shelling around Ras al Ain, also known as Sani Kani, the border town that appears to be a key Turkish objective for the campaign.

The SDF also said they have come under attack by Islamic State sleeper cell taking advantage of the Turkish offensive.

Five Isil fighters were killed in a failed attack on security forces in the village of Tweimiyeh, near the Turkish border, on Thursday morning, the group said.

“Daesh sleep cells this Thursday morning tried to take over al Twimiyah villages to hit security and cause chaos by targeting one of our military points,” the SDF said in a statement.

“A number of them were killed and the rest were captured.”

The reported attack came as Kurdish authorities accused Turkey of a “clear attempt” to help Isil prisoners escape by shelling a prison holding militants of more than 60 nationalities.

Shelling on Wednesday night targeted part of the Chirkin prison in the city of Qamishli, Kurdish-led authorities said in a statement. No Isil prisoners are known to have escaped. rea.

London-born Alexanda Kotey, 35, and El Shafee Elsheikh, a 31-year-old Briton born in Sudan, had been in the custody of the Kurdish-led Syrian Democratic Forces since February 2018. They will now face trial in the United States.

Syrian government allies Russia and Iran both called for an end to the offensive.

Britain joined other European Union countries in calling on Turkey to cease the operation on Wednesday.

Russia, another Syrian ally, blamed the chaos on American policy making and called for dialogue between Turkey and the Assad government. Bashar Assad does not control the Kurdish-led autonomous region in northern Syria.

China said Syria’s territorial integrity must be “respected” and called on Turkey to “exercise restraint.”