You are here: Home / MidEastGulf / Did Turkey abandon Aleppo to fight Syrian Kurds? 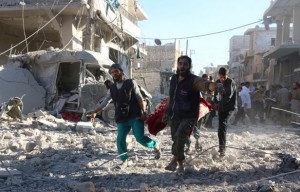 Developments on the ground in Syria indicate the possible blossoming of an agreement between Turkey and Russia over the conflict, illustrated by the changing priorities of the government in Ankara. The recent Turkish-led offensive against ISIS inside Syria was not met with any resistance by Russia or the Syrian regime, even though Turkey has been explicitly pro-opposition since the early stages of the revolution in 2011. The offensive was preceded by a Turkish-Russian rapprochement, which has been widely cited to explain Russia’s acquiescence to the military action. Similarly, the recent unprecedentedattacks by the Syrian regime and Russia to capture rebel-held eastern Aleppo has not led to an increase in the support provided to rebel groups by their backers, namely Turkey. Although the details of this possible new alliance remain largely unknown, rumors are circulating about a behind-the-scenes agreement between Russia and Turkey that would allow the latter to intervene and check the power of Syrian Kurdish groups in the north in exchange for reducing their support for rebels fighting Assad in Aleppo.

According to a recent report by Mohammad Ballout, a journalist for the pro-regime Lebanese newspaper Assafir, the alleged security deal between Turkey and Russia allowed Turkish troops to enter Syria to prevent Syrian Kurds from establishing an autonomous administration along the Turkish border. The Assad regime would also cut support for Syrian Kurdish military units affiliated with the Kurdistan Workers’ Party (PKK), which Ankara considers a terrorist organization. In exchange, Turkey would stop arming rebels fighting the Syrian regime in Aleppo, Syria’s second city, and agree with Russian proposals to designate certain rebel groups as terrorists. Ballout added that the details of this trade-off were reached after a series of meetings between security officials from Russia, Syria, Iran, Iraq and Turkey. More meetings are reportedly scheduled in Damascus, Moscow and possibly Istanbul to finalize the parameters of the deal. He also referred to the Turkish-led military operations, with the diversion of thousands of rebel fighters from fronts in Aleppo and Idlib to the north, as a first step in “…a Turkish initiative to separate the factions it directly mentors from the extremist groups.”

These reports indicate that some kind of behind-the-scenes agreement may have been reached between Russia and Turkey. It is telling that troops participating in the Turkish-led intervention in Syria have not been targeted by Russian or Syrian airstrikes, though both parties have long labelled the rebel groups participating in the Turkish offensive as ‘terrorists’. This has been coupled with the significant shift in Turkey’s policy towards Assad after a statement by Turkish Prime Minister Binali Yıldırım in which floated the idea that Syrian President Bashar al-Assad could be a partner in a “transitional phase.” This sudden shift followed the rapprochement with Russia after an eight-month rift triggered by Turkey’s downing of a Russian fighter jet in late 2015.

Sources on the ground also confirmed a recent cutback in military aid to rebel groups in Aleppo. “Any large scale attack by the Syrian regime to capture Aleppo usually leads to an immediate increase in the support we receive from our allies in order to halt the offensive. But it seems that something has changed. Although the regime and Russia are launching the worst attack so far to capture Aleppo, we still have not received any significant support to counter them,” said Ahmed Hussein, a media activist in Aleppo affiliated with Ahrar al-Sham. Commentingonto the recent escalation in the city, Turkish President Recep Tayyip Erdogan only provided vague statements on the need for foreign powers to “continue our discussions.” Coupled with Turkey’s lack of a response to the targeting of an aid convoy outside Aleppo during the now-dead ceasefire, the government in Ankara has markedly changed its previous belligerent tone toward the actions of the regime and Moscow in the country.

Moreover, a well informed western diplomat based in Beirut, who spoke on condition of anonymity, also confirmed the existence of such a deal. “Different officials allied with the Syrian regime confirmed on several occasions the existence of a trade-off deal with Turkey,” the envoy claimed. “None of them revealed the details of the deal; however, they all mentioned that Turkey gave up on Aleppo in exchange for its operations against the Syrian Kurds along the Turkish border in northern Syria. They also mentioned that Turkey asked for a few months in order to distance itself from some rebel groups that are considered radical.”

The mystery that is surrounding the details of the rumored agreement between Turkey and Russia could be due to the fact that secrecy is essential for the success of the deal. However, the prevailing mystery may also be related to the inability of the actors to finalize the details of such a complicated agreement. However, if such a deal comes to fruition, it will very likely increase the complexity of the Syrian conflict, with more killing and displacement of civilians in Aleppo, radical groups increasing their influence on the ground and renewed ethnic tensions between Syrian Arabs and Kurds.