You are here: Home / Mediterranean / Did Obama Defeat ISIS in Libya? 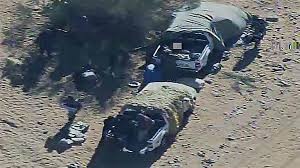 One of former President Barack Obama’s last acts as military commander-in-chief was ordering bomber strikes in Libya that killed as many as 90 ISIS fighters last week, like reported by nbcnews.com.

The strike was captured in graphic video, and when the bodies were counted this week the initial estimate of 85 killed was revised upward. The missiles took out a remnant of an ISIS force that once controlled much of central and eastern Libya — and that the U.S. had feared would establish a second Caliphate like the one in Syria and Iraq.

Does that mean the Obama administration achieved its goal of saving Libya from ISIS, and preventing the creation of a new safe haven for ISIS jihadis driven from their shrinking kingdom in Syria?

“This was the largest remaining ISIS presence in Libya,” a U.S. defense official said of the two jihadi encampments taken out in the airstrikes. “They have been largely marginalized but I am hesitant to say they’ve been completely eliminated in Libya.”

In mid-2014, three years after the collapse of the Qaddafi regime, ISIS had about 1,000 fighters in Libya. Taking advantage of a power vacuum in the center of the country, far from the major cities of Tripoli and Benghazi, ISIS expanded rapidly over the next 18 months. Local militants were joined by jihadis from the rest of North Africa, the Middle East, Europe and the Caucasus. The force absorbed or defeated other Islamist groups inside Libya, and the central ISIS leadership in Raqqa, Syria, battered by coalition airstrikes, began urging foreign recruits to head for Libya instead of Syria.

ISIS seized control of the coastal city of Sirte, Qaddafi’s hometown, in early 2015, and then began to expand to the east and south. By the beginning of 2016, it had effective control of 120 to 150 miles of coastline and portions of the interior, and had reached Eastern Libya’s major population center, Benghazi.

In spring 2016, the U.S. Africa Command estimated that ISIS had about 5,000 fighters in its stronghold of Sirte. (French estimates of total ISIS forces in Libya at the time were as high as 10,000.)

Then the indigenous rebel groups who had staked their own claims to Libya turned their weapons on ISIS — with the help of airstrikes from Western forces, including U.S. drones. The Libyan population resented the outsiders who wanted to establish a fundamentalist regime on their soil.

“The Libyans don’t like outsiders. That was one of the biggest assets in fighting ISIS there,” the defense official said.

Militias loyal to the new Libyan unity government, plus a separate and rival force loyal to a former officer in the Qaddafi regime, launched an assault on ISIS outposts in Sirte and the surrounding areas that lasted for months. According to U.S. military estimates, ISIS ranks shrank to somewhere between a few hundred and 2,000 fighters.

Last August, the U.S. military began airstrikes that, along with continued pressure on the ground from the Libyan militias, pushed the remaining ISIS fighters back into Sirte, eventually relegating them to a few blocks of the city. In all, U.S. drones and planes hit ISIS nearly 590 times.

Throughout the fall, the Libyan militias cleared building after building, finally reclaiming the city in mid-December.

A senior U.S. counterterrorism official cautioned that recent successes should not be oversold. He said that while the strikes that killed 90 “squirters” were a serious blow to ISIS in Libya, the group had not been “decimated.”

“We had success in killing a lot of people, but we are seeing camps in other ungoverned areas of Libya and they have a record of fading into the hinterlands and then reassembling.

“That’s not to say they aren’t on the downswing, but they can take a hit. Don’t count them out.”

A U.S. intelligence official agreed, saying “knocking out a terrorist group is never done with a single strike.”

Defense and intelligence officials also worry that ISIS may soon be given an opportunity to recover. With the terror group temporarily on its heels, the country’s indigenous militias may set their sights on each other.

Two rival governments, one in the east and one in the west, are contending for control of Libya.

The UN-backed unity government, known as the Government of National Accord and based in the western city of Tripoli, took power in March 2016. The U.S. recognizes the GNA as the legitimate government.

The GNA does not have an official military, but is backed by a collection of militias. The most important is the Misratan militia, which took the lead in the fight against ISIS in Sirte.

A rival, anti-Islamist government opposed to the GNA and called the House of Representatives is based in the eastern town of Tobruk, near the Egyptian border. It is backed by its own group of militias, with the largest calling itself the Libyan National Army.

Led by a Qaddafi sidekick-turned-foe, Field Marshal Khalifa Haftar, the LNA is supported by Russia, Egypt and the UAE. The LNA drove Ansar al-Sharia, an al Qaeda affiliate, out of Benghazi, but it has also taken over oil fields held by militias allied with the GNA.

Without ISIS to keep both sides busy, U.S. defense officials and experts are concerned the rival armed groups will intensify their efforts against each other.

It is also unknown what the new administration plans to do about Libya. According to officials, the Trump team is likely to authorize a greater number of manned and unmanned airstrikes around the world than the Obama administration, but it is not known yet where that will be.