You are here: Home / Africa / Despite several blows to Shabab, worries persist about their resilience 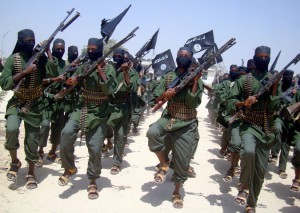 The Shabab are not having a good week.

On Tuesday, African Union forces said they had killed six commanders of the Shabab, the violent and powerful Islamic insurgent group that has been terrorizing Somalia for years. Among the six killed in the Janale area, theAfrican Union said, were a Yemeni explosives expert and a Kenyan trainer.

This followed the news on Monday, when the Pentagon announced that it had killed Hassan Ali Dhoore, a senior member of the Shabab’s security and intelligence wing, in an airstrike.

Still, analysts question how effective this strategy is. Just like in other battle zones, such as Afghanistan or Iraq, Somalia’s militants have proved resilient in the face of superior firepower.

Last month, the Pentagon said it had killed 150 Shabab fighters in an airstrike. But since then, there have been several deadly Shabab attacks, including the suicide bombing of a cafe in Galkayo, a town in central Somalia that had not been considered a hotbed of Shabab activity.

“What we’ve seen time and time again is that there’s a whole swath of middle-ranking commanders who are well trained, experienced and eager to step into the shoes of their departed colleagues,” said Cedric Barnes, the Horn of Africa project director for the International Crisis Group, a research organization that studies conflicts.

The recent strikes against the Shabab will “hurt them, no doubt,” he said, “but they tend to regenerate.”

Somalia has been steeped in various degrees of chaos and bloodshed for more than 25 years since its central government collapsed and clan-based warlords tore apart the country in a battle for resources and power.

A glimmer of hope appeared in 2011 when African Union troops pushed Shabab fighters out of Mogadishu, the capital.

But Somalia’s political class is widely considered corrupt and ineffective, and analysts say that Somalia’s leaders squandered the opportunity that the Shabab withdrawal presented.

In the past year, the Shabab have steadily rebuilt, killing hundreds of African Union soldiers in well-executed guerrilla attacks and countless civilians in suicide bombings. They have expanded into new areas, including traveling by sea to a small town on Somalia’s northeastern coast, and they have been purging their ranks. Last week, the Shabab publicly killed a Tanzanian fighter suspected of being a spy.

The American government, which has invested billions of dollars in trying to stabilize Somalia, has tried to check the Shabab’s momentum by stepping up airstrikes and staging a few commando raids. But it seems there is little appetite for a larger military intervention.

The Shabab are expected to stage more assassinations and suicide missions, possibly in June, during the holy month of Ramadan, when being martyred is considered especially auspicious for the afterlife. The Shabab are also likely to try to disrupt the Somali government’s plans to hold limited elections this year.