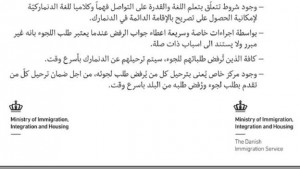 “Denmark has decided to tighten the regulations concerning refugees in a number of areas,” the advert begins.

It warns that Denmark has recently passed legislation cutting benefits by up to 50% for newly arrived refugees.

The governing Venstre (Liberal) party won power in June after running on an anti-immigration platform.

Venstre rely on the support of the anti-immigration Danish People’s Party (DPP), which made large gains as they took 20% of the vote in this year’s election.

The DPP’s influence has led to the adoption of some of the toughest immigration policies seen in the EU in recent years.

Lebanon has taken in more than one million Syrians fleeing from their conflict-torn country. Turkey is the only country to have taken more.

Along with warning about benefits cuts, the Danish advert also highlights that “all rejected asylum seekers must be returned quickly from Denmark”.

The DPP wants Denmark to leave the Schengen area – boosting border controls is one of its top issues – and to make it harder for EU migrants to claim benefits in other member states.

Denmark has already opted out of the EU’s resettlement programme for asylum seekers.

New rules reducing the benefits that asylum seekers can apply for were approved in July.

Married couples with children are able to apply for 16,638 kroner monthly, instead of the previous 28,832.

Immigrants who pass a Danish language test are to be entitled to a 1,500 kroner monthly bonus.