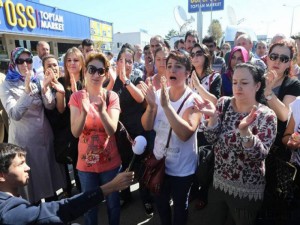 Turkish police staged a major swoop on the Ankara-based offices of a media group critical of President Recep Tayyip Erdogan, a day after two British reporters were jailed on hugely controversial terror charges.

The raids on Koza-Ipek Media sparked fresh concern about deteriorating press freedoms on Turkey, which is gearing up for a snap November legislative election, its second in five months.

The swoop came a day after a court in Turkey’s Kurdish-dominated southeast ordered two British journalists working for US-based Vice News to be remanded in custody on “terror charges”.

Masked police broke into and searched a number of offices belonging to Koza-Ipek Media, the Dogan news agency reported.

Police entered 23 offices as well as Ipek University in Ankara belonging to its parent company Koza Ipek Holding “as part of a terrorist investigation into Fethullah Gulen”, the state-run Anatolia news agency reported.

It said the conglomerate’s chief executive, Akin Ipek, was overseas.

It was the latest move targeting supporters of the powerful “Hizmet” (Service) movement headed by Gulen, a former ally-turned-foe whom Erdogan accuses of trying to create a “parallel state” with the aim of overthrowing his government.

Erhan Basyurt, editor-in-chief of the Bugun daily denounced the raids on Twitter.

“A police operation that aims to silence our group has started.
Police raided our office.
How shameful!” he wrote.

Several days ago, Fuat Avni, a mysterious Twitter user who has previously released sensitive claims about Erdogan’s entourage, had warned of an imminent police raid targeting opposition media as the government wages a major campaign against Kurdish rebels.

For several years Gulen was seen as a close ally of Ergodan and his Islamic-rooted AKP.

But in 2013 the authorities blamed Gulen for corruption allegations that rocked Erdogan and the ruling elite, and the government launched an all-out war against him and his supporters.

Gulen, who left for the US in 1999 to escape charges of anti-secular activities by the government at the time, has denied being behind the graft allegations against Erdogan.

The movement brings together a wide range of interests, from schools and media to finance, and is believed to be have the support of millions of Turks.

In December, police arrested dozens of people in raids on other media outlets with ties to Gulen.
The pro-Gulen Samanyolu TV (STV) chief Hidayet Karaca has been remanded in custody on charges of leading a terrorist group.

There has been growing concern about deteriorating press freedoms on Turkey and in particular over the numbers of journalists facing legal proceedings on accusations of insulting Erdogan.

As Erdogan and his ruling Justice and Development Party (AKP) prepare for snap elections on November 1 under the shadow of a major offensive against Kurdish militants, opposition journalists have complained of a major squeeze on all critical media.

The two Vice News British reporters and their translator, an Iraqi national, have been charged by a court in the southeastern city of Diyarbakir with “engaging in terror activity” on behalf of the Islamic State extremist group.

Vice News condemned the charges as “baseless” and “alarmingly false”, while leading rights groups have called for the immediate release of the reporters.

The EU’s foreign service expressed concern over the arrests, calling for an “independent and transparent” investigation.

The three are currently being held in a high security prison in Diyarbakir, the Dogan news agency reported.
Their case should now be sent to trial but they can appeal their arrest.

Erdogan caused outrage in the run-up to June 7 elections by saying Cumhuriyet newspaper editor-in-chief Can Dundar would “pay a heavy price” over a front-page story which it said proved Turkey had sent arms to Islamist rebels in Syria.

“You can’t hide the truth even if you silence all the newspapers,” Dundar wrote on Twitter Tuesday.

The front page of the anti-government Sozcu daily carried blank columns signed by its columnists in protest at the “unprecedented pressure on the media, the likes of which was not seen even during Turkey’s coup era.
”
Meanwhile the mainstream Milliyet daily has dismissed two high-profile columnists – Kadri Gursel and Mehves Evin – after they wrote pieces critical of the government.