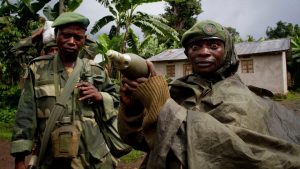 Congo’s military says that members of the M23 rebellion group have attacked a base in eastern Congo’s Rutshuru area and fighting is underway, like reported by africanews.com.

“The M23 insurrection movement attacked the FARDC positions in Rutshuru with the intention of destabilizing the province. At present, the fighting is underway and the loyalist forces are determined to put an end to this armed group once and for all,” said General Sylvain Ekenge, deputy spokesman for the Congolese military, also know as FARDC.

The rebels attacked in remote villages of Runyonyi and Chanzu, on the strategic hills between Rwanda and Uganda in the North Kivu province, he said. The rebels had taken over lands near there in 2012 and were pushed from the area into Uganda and Rwanda by Congolese and United Nations forces in 2013.

The M23 group, however, denied that they are behind attacks or fighting with the military or government in a statement Monday.

The fighting has forced a heavy influx of people fleeing to Uganda, according to the Uganda Red Cross.

The group said Monday it deployed a team to assess needs among people fleeing the fighting overnight between unknown armed groups. Spokeswoman Irene Nakasiita said hundreds were camping at the border post of Bunagana, seeking shelter in Uganda.

Eastern Congo is prone to insecurity with fighting between rival armed groups, including rebels opposed to the government in the capital, Kinshasa.

In recent years an armed group with roots in Uganda has been blamed for a series of attacks on civilians in the region.

In a security alert Sunday, the U.S. Embassy in Congo noted “reports of a potential attack in Goma,” the capital of North Kivu province. “There is increased security presence throughout the city,” the advisory said, adding that U.S. government personnel in the area were advised to shelter in place.