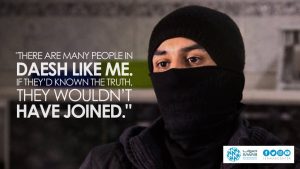 Abu Dhabi: The Sawab Center, a joint UAE-US initiative to combat online propaganda of Daesh and other extremist groups and promote positive alternatives to extremism, announced the launch of a new anti-youth recruitment campaign on its social media platforms, like reported by gulfnews.com.

Even as its territory in Iraq and Syria shrinks, Daesh continues to recruit youths and urge them to commit terrorist acts in their home countries.

Daesh has made efforts to encourage youths in diverse locations, such as Germany, Morocco, Saudi Arabia, France, Indonesia, and Australia, to commit acts of brutality against civilians and fellow citizens.

Daesh agents are known to monitor children who visit extremist sites or radical chat rooms and pretend to befriend them, before manipulating them into committing violent acts. Daesh operatives also targets for radicalisation at-risk youths suffering from mental illness, living in broken homes, or who have criminal backgrounds.

The #DeludedFollowers campaign will expose the lies and falsehoods promoted by Daesh recruiters and address the underlying complexes and issues of vulnerable youth, including loneliness, social isolation, bullying, and boredom.

Sawab’s messaging will humanize the victims of Daesh attacks through highlighting the stories of parents, siblings, children, and other loved ones killed by Daesh. The campaign will also offer inspirational and motivational messages directed to at-risk youths to help them resist the deceptions and false promises of Daesh agents.

#DeludedFollowers is the Sawab Center’s 17th proactive social media campaign. This latest campaign is a follow-on from Sawab’s highly successful January 2016 #DeludedFollowers campaign, which focused on the issue of foreign fighters and registered over 163 million impressions on Twitter.

Other Sawab campaigns have focused on the terrorist group’s devastation of families, communities, and ancient civilizations; the importance of diversity to a well-functioning society; and the important contributions of women in preventing and resisting extremism and in advancing their societies.

Since its launch in July 2015, the Sawab Center has encouraged governments, communities, and individual voices to engage proactively to counteract online extremism. During this time, the Center has given voice to the millions of people around the world who oppose Daesh and support the Center’s efforts to expose the terrorist group’s brutality and criminal nature.