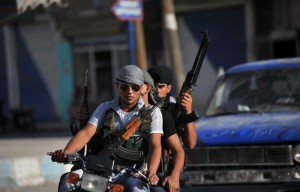 Unknown gunmen have attempted to assassinate an ISIS commander in a village in eastern Syria in the latest armed attack to target the extremist group in the restive Deir Ezzor province.

“A Syrian ISIS commander was injured after an attempt to assassinate him by unidentified militants riding a motorbike in the rural Deir Ezzor village of Al-Tayyana,” the Syrian Observatory for Human Rights reported Monday.

Trusted sources told the Observatory’s activists in areas east of Deir Ezzor that ISIS has carried out a campaign of arrests and raids on houses in the villages of Al-Quriyah and Al-Tayyana.

A number of people have been arrested including ISIS members in the two east Deir Ezzor villages, according to the monitoring NGO.

Several hours ago, the Observatory reported that ISIS had also carried out raids on civilians’ houses in the town of Al-Mayadeen in eastern rural Deir Ezzor.

The arrests targeted civilians, some of whom had been members of Islamist militant groups.

Trusted sources in the town told the Observatory’s activists that among 15 others, ISIS arrested a man and his wife. The sources also mentioned that an armed woman accompanied the extremist group’s members during the raid.

Al-Shami, who founded the Deir Ezzor is Being Slaughtered Silently social media campaign, told the site Awwaid is ISIS’s security official in the village.

“After [the attack] by people who oppose ISIS in the village and have a vendetta against the security official, he was left gravely injured.”

According to the activist, Awwaid works “as an intelligence officer, writing reports and sending them to the group’s leadership.”

The tempo of attacks on ISIS in eastern Syria has increased since the beginning of the year, when reports first began to emerge of unknown gunmen striking the group throughout region with hit and run shootings, killing and wounding dozens of Islamist fighters.

In response ISIS has heightened its security measures in the Deir Ezzor province, where it seized large swathes of territory in a campaign lasting from April to July 2014 which saw the ouster the rebel groups active in the region.

As the militant group consolidated its control over the province, it executed over 700 members of the local Shaitat tribe in a three-day melee of executions outside Al-Mayadeen, one of the areas the tribe had a presence.