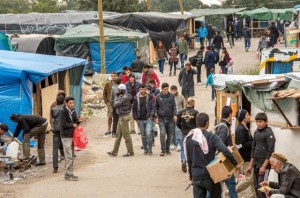 Surrey’s police chief has warned that Islamic terrorists may be sheltering in the Jungle in Calais, as the area is completely “un-policed”. Migrant rights activists have slammed his comments but he has stood by them.

Kevin Hurley, a former head of counter-terrorism at City of London Police visited the Jungle migrant camp in Calais earlier this month to view the conditions for himself. During the visit he voiced concerns to the BBC that the camp is a “completely un-policed space” in which criminal activity is being allowed to flourish.

Describing the place as a “potential hiding place” for jihadists, he reported that one migrant had told him there were “definitely people who supported the ideology of Isis Daesh” living within the camp.

And he said the camp could easily be used by jihadists returning from the Middle East as a route into the UK. “If I were a returning jihadi I would smuggle myself in among this group – you’d easily get lost,” he commented.

Following the broadcast of his visit on regional television Mr Hurley was criticised by numerous charities working in Calais.

One of them, Care4Calais told the Farnham Herald: “The overwhelming experience for the Care4Calais team is that all the individuals we meet in the camp are just ordinary people who have experienced terrible things and desperately need our help, care and compassion.”

Mr Hurley, who is hoping to be re-elected as Police and Crime Commissioner, has defended his comments, posting a statement on his Facebook campaign page in which he said: “As one has come to expect my comments have been deliberately misinterpreted by those who don’t find them matching their view of the world.

“It has been no surprise to me that so many of those who dissent have been offensive and most unpleasant to me. I am apparently not allowed to feel alarmed when surrounded by hostile groups of young men when in isolated areas of the Calais camp.

“I might add these were less worrying than several hostile approaches by emotional ‘aid workers’ that resulted in crowds of young men paying an interest and effectively following the lead of the ‘aid workers’.”

He added: “Whilst many of the people in the camp may have come from unpleasant and even terrible lives of suffering and at risk to themselves on difficult journeys, most probably seeking a better life, we cannot be sure that all of them are good people.

“With our insecure borders we have no certainty. In my view it could also be returning UK jihadists or criminals.”