You are here: Home / Senza categoria / Defence Secretary Ashton Carter: US will send more force in to Syria 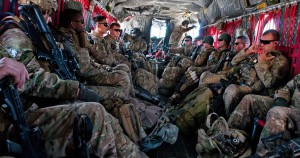 More US troops will “absolutely” be deployed to Syria if Washington identifies more “capable local forces” as partners in the fight against Islamic State (IS), Defence Secretary Ashton Carter said in an interview aired Sunday.

Carter’s comments to ABC News came about a week after the White House announced the deployment of “fewer than 50” special operations personnel in the north of the war-ravaged nation, in a bid to strengthen forces battling IS fighters.

“In order to have victory stick, you have to have local forces involved who can keep the peace after you’ve helped them win the peace,” Carter said in an interview.

“Now those are hard to find in Iraq and Syria,” he added.

“If we find additional groups that are willing to fight [IS] and are capable and motivated, we’ll do more. The president has indicated a willingness to do more, I certainly am prepared to recommend he do more, but you need to have capable local forces – that’s the key to sustainable victory.”

When asked if that could mean more American forces on the ground, Carter replied, “Absolutely.”

Obama’s authorisation of the first sustained deployment of US forces to Syria reversed a long-standing refusal to put US boots on the ground in the war-ravaged country, where more than 250,000 people have been killed since March 2011.

While US fighters are believed to have previously carried out covert missions in Syria, they have not been deployed there on a continuous basis.

For over a year, the US has led a 65-member coalition that has conducted air strikes against IS targets in Iraq and Syria. But that has had only a limited impact in stopping the jihadi advance.

Carter said the US deployment “is intended to help bring to bear all that the US can bring to bear, in the way of intelligence, air power and so forth, to help these motivated, capable local forces.”

“This is an instance of the whole strategy. We have to beat ISIL. We will beat ISIL. ISIL’s heart is in Syria and Iraq.”