You are here: Home / MidEastGulf / Defeating the Islamic State 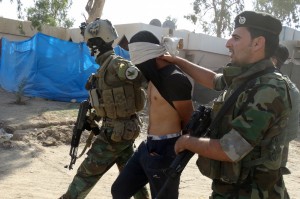 After nearly half a decade of civil war in Syria, and years of a terrorist insurgency in Iraq, there is now some progress in both countries regarding the fight against the so-called Islamic State. International efforts to initiate meaningful diplomatic dialogue towards ending the Syrian civil war and countering the Islamic State have produced at least more agreement on paper than at any time since the war started in March 2011. The increased coalition strikes and coordination with Syrian rebel groups is also yielding positive results. In Iraq, the combination of Shi’a militias and the slowly improving Iraqi Security Forces (ISF) is making gains against the Islamic State in Ramadi, and has kept the group from expanding much beyond the territory it held in late May 2015. The Islamic State will finish 2015 in worse shape than it began the year, but it will take unprecedented resources, focus, and commitment from many parties to say the same thing about 2016 and beyond.

As difficult and costly as the military fight against the Islamic State has been and will continue to be, the broader fight to keep the group from returning will be far more challenging in almost every respect. The understandable focus on demonstrably toppling the Islamic State in places like Mosul and Raqqa obscures the true nature of the challenges that will immediately eat away at any military victory.

Pouring resources into countries rife with issues of sectarianism, corruption, and violence yields only fleeting gains and long-term resentments. This has been demonstrated with painful clarity in the international reconstruction and reconciliation efforts in Iraq and Afghanistan. Avoiding long-term disappointment will require resolving the societal divisions that allowed the group to rise in the first place.

In 2016, the Islamic State will likely face tactical defeat in both Raqqa and Mosul; if the current military pressure continues, the group will be hard-pressed to maintain its current hold over territory. Successful military campaigns against the Islamic State in its two ‘capitals’ will be significant accomplishments in the emergency approach to defeating and degrading the group. Battling violent and corrosive sectarianism, however, should also be a critical and immediate goal.

Increased military cooperation to defeat the Islamic State in the absence of an agreement to address the sectarian divisions that fuel the group and its many counterparts will only yield regressive results. There are indeed prospects for stability in Iraq and Syria—as well as in Yemen, Afghanistan, and elsewhere—but they will require a shared strategy between many competing forces. It will have to be created and sustained at many levels—both local and regional—and will need to accompany and shape the military effort at every step.