You are here: Home / Senza categoria / Debunking myths about the Kurds, Iraq and Iran 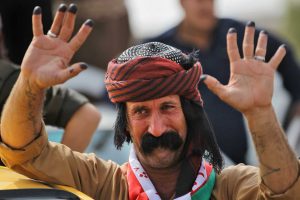 The Kurdish referendum in Iraq has failed spectacularly, despite predictions of beckoning independence. Many who relied on the trope that “statehood was not a matter of if but when” were shocked and unprepared for the referendum’s outcomes, like reported by warontherocks.com.

Erroneous assumptions and policy prescriptions are now driving post-referendum analyses. Pundits, analysts, and the media are depicting the rapid re-taking of Kirkuk by Iraqi Security Forces (ISF) and other “disputed territories” as “a cataclysmic betrayal,” an “assault on the Kurds,” and another “victory for Iran.” While the U.S. policy response has thus far been measured – seeking to diffuse tensions and remain focused on defeating ISIL – some officials are calling to re-assess military support to Iraqi forces if attacks against Kurds continue. Others are pressing for more direct support to the Kurdistan Regional Government as a means of preventing further conflict and countering Iranian influence.

These voices ostensibly have the right priority – stabilization – but suffer from faulty assumptions about the actual sources of instability. Tensions between Baghdad and Erbil may have flared after the referendum, but they are rooted in the unresolved territorial and political issues of post-2003 Iraq. While it is certainly true that Iran and its militias have gained influence in Iraq, this influence is the result of a weak Iraqi state and was emboldened by the referendum, not by Baghdad’s effort to exercise its federal authority. As I discussed in this week’s episode of the War on the Rockspodcast, the solution is to reinforce Iraqi state sovereignty, Iraq’s regional relations, and recent trends toward a civil state. This includes negotiating disputed territories and filling political, economic, and security gaps that are enabling Iran and undisciplined militias to thrive.

Kurdish leaders have themselves to blame for their current predicament, not the United States.  Despite statements by the U.S. government expressing concern about the potential destabilizing effects of the referendum and advising the Kurdistan Regional Government to postpone it, Masoud Barzani refused. Instead, his Kurdistan Democratic Party (KDP) stepped up its lobbying efforts in Washington and other capitals. Kurdish media outlets also selectively published statements from U.S. congressmen and former U.S. officials indicating their support for the Kurds, leading local populations to believe the referendum had U.S. backing. In my conversations with various Kurdish groups in Erbil and Suleymaniya the week before the referendum, many stated that Washington “would eventually support the referendum given the strong U.S. and Israeli ties.” Another common sentiment was that the KRG was “too important to fail” and that the United States would eventually defend the Kurds against any post-referendum threat.

Rather than uniting the Kurds of Northern Iraq, the referendum deepened intra-Kurdish divisions, which played in Baghdad’s favor. Over time, some Kurdish officials, mainly those in the Patriotic Union of Kurdistan (PUK) grew increasingly concerned about warnings from Baghdad, Turkey, and Iran. These officials began to take seriously the possible consequences, including closed borders, unleashed militias, and halted water supplies to the landlocked region. Some of these officials told me that just days before days before the referendum, they sought ways to allow Barzani to save face and call it off – to no avail. These concerns deepened alongside the referendum’s political fallout. This fallout included Baghdad’s closing of the region’s international airspace, cancellation of some regional flights, and federal seizure of Kirkuk and other disputed territories that were under the de facto control of the Peshmerga.

Iraqi forces did not “invade” Kirkuk. Rather, they entered Iraqi state territory through a negotiated settlement with some Kurdish officials. According to PUK official Bafel Talabani, the withdrawal of Peshmerga forces was essentially a tactical retreat from the Iraqi Army’s superior military power. It was an expected consequence of the Kurdistan Regional Government’s territorial overreach and the over-determined capabilities of its defense structures – unfortunately, however, not one expected by Barzani. Although the Kurdish security apparatus, including Peshmerga forces, courageously helped to push back ISIL, it is inherently vulnerable and internally divided. The Peshmerga’s expansive territorial gains – which represented a 40 percent increase in Kurdish-controlled lands in Iraq – could not have occurred without coalition air support. And they were unlikely to be sustained without coalition airpower.

Contrary to what some have claimed, Baghdad’s reassertion of federal authority over Kirkuk and other disputed territories was not a decision deviously engineered by Tehran. Iranian General Qassim Sulaimani likely played a role in cajoling Iraqi officials, pressuring Kurdish party leaders, brokering deals, and mustering militias, but the decision to militarily retake Kirkuk was made by Iraqi Prime Minister Haider al-Abadi in response to pressures by the national parliament and local populations. These reactions extend beyond the referendum. They reflect the fact that a vast majority of non-Kurdish Iraqis deeply resent the Kurds’ post-2003 territorial expansion and antagonistic behavior: raising the Kurdish flag in Kirkuk, abandoning the Yezidis to ISIL, and “Kurdifying the Ninewa Plains.” This is why so many minority groups were jubilant about Baghdad re-assuming control of northern Iraq.

These dynamics coincide with a heightened sense of Iraqi nationalism. This trend has developed under Abadi’s leadership and alongside the successes of the Iraqi Army and Counter Terrorism Service against ISIL. Iraqi nationalism is reflected in the attempt to create a civil state and to weaken sectarianism (According to a civil movement leader in Baghdad, of the 150 registered entities for the Iraqi elections planned for spring 2018, 76 have the word civil or civilians in them). At last Friday’s demonstration in Tahrir Square in Baghdad that I attended, thousands of reform movement activists, which included Sadrists, Communist party members and people from all parts of Iraq, gave speeches and sang songs against sectarianism and corruption, as well as the Iraqi national anthem. Many were draped in the Iraqi flag.

This is not to deny malign Iranian influence in Iraq. Iran has gained leverage through demographic changes, militias, recruiting young people, and business activities, particularly since the ISIL onslaught in 2014. Yet the source of this influence is a weak Iraqi state. In some liberated areas, Iranian-backed militias – which represent about 20 percent of all militias in Iraq – have filled security, financial, and administrative vacuums. They control checkpoints and trade routes, and are coopting local populations with salaries, services, and food, while also engaging in extortion, kidnapping, and killings. Some Sunni Arabs have even joined these militias as a means of survival. The Kurdish referendum has further empowered undisciplined militias, giving them another reason to remain long after ISIL is defeated.

The United States should clearly state its strategic interests in Iraq that will enable the defeat of ISIL and permit regional stability. This objective should be embedded in a comprehensive regional policy that emphasizes state sovereignty and territorial integrity. Specifically, Washington should:

To help stabilize Iraq after ISIL and check nefarious Iranian influences, the United States needs to reinforce a strong and sovereign Iraqi state. This should include security support, mediation efforts, Iraq’s regional integration, and restraint. Americans should be mindful of the important territorial and demographic changes that have occurred since 2003 and the need to be a balanced broker. This, in turn, requires recognizing and supporting nationalist trends toward a civil Iraqi state and efforts to move away from ethno-sectarianism. Finally, the United States should also ensure that its support does not overly enable, or encourage any group, particularly the Kurdistan Regional Government, from thinking it does not have to negotiate or compromise with Baghdad.  U.S. support to Iraqi Kurds should be conditioned on this compromise.