You are here: Home / Mediterranean / Deaths reported in heavy clashes near Libya’s Benghazi 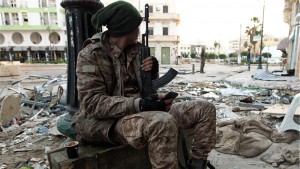 Local sources said on Saturday morning the fighting continued for hours and heavy and medium weapons were used.

The clashes erupted when the Haftar forces advanced toward the area controlled by the Al Shura council fighters in the Mediterranean city of Benghazi.

Al Shura council is made up of several brigades including Ansar Al-Sharia (an offshoot of al-Qaeda) and Libya shield- some of which are affiliated woth the Muslim Brotherhood in Misrata.

The clashes came one day after Haftar, the newly appointed commander of Libya’s armed forces, announced in a press statement that the Libyan armed forces were completing preparations to begin the liberation of Benghazi.

Local sources said among those injured was a high-ranking general fighting on Haftar’s side.

Last week, internally displaced Libyans from Benghazi organised a demonstration outside the UN office in Tripoli demanding immediate intervention to prevent the worsening humanitarian crisis in their country.

The demonstrators also demanded the UN bring those in charge of war crimes to justice, and the reconstruction of Benghazi, which has suffered severe damage as a result of the clashes.