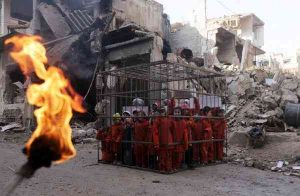 A Muslim teacher on trial for allegedly plotting attacks on London showed children Islamic State videos and claimed to be part of “a death squad sent by Allah” after the Westminster attack, a court has heard according to breitbart.com.

The terror suspect also argued that lying and jihad were part of his religion and blamed “fascists” and police. He also claimed, however, that his seemingly pro-terror comments did not represent his views.

Faith school worker Umar Haque, 25, is standing trial at the Old Bailey for allegedly planning Islamist terror attacks on locations such as the Palace of Westminster and Westfield shopping centre.

He was born into a Bangladeshi heritage family and had previously worked for a mosque and Newham council in East London, the Newham Recorder reports.

On trial alongside him is Abuthaher Mamun, 19, Muhammad Abid, 27, and Nadeem Patel, 26, who he allegedly recruited into terror via the mosque. Mr. Haque and Mr. Mamun are both accused of preparing acts of terrorism in 2017.

“We’re here to cause terror, my brother. We are a death squad sent by Allah and his messengers to avenge my Arab brothers’ blood,” he allegedly said.

Mr. Haque had refused to comment on the recordings in police interviews and told the court his words were “overzealous” and that he did not recognise them.

He also told jurors he had been “preparing self-defence against fascists up-rise” and said there were “fascist police as well as fascist groups”.

When accused of being dishonest he claimed that “Islamic jurisprudence” allowed Muslims to lie to protect themselves and said later that jihad was also a “known part of Islam”.

On previous days of the trial, the court head how Mr. Haque instructed young people in terrorism at the Ripple Road mosque in Barking while making them promise to keep the activities secret.

He also played an Islamic State video while working at the Lantern of Knowledge School in Leyton, where he worked in 2015 and 2016.