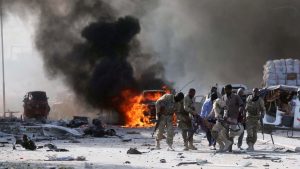 At least 14 people have been killed in a car bomb blast outside a popular hotel in Somalia’s capital, Mogadishu, according to a government official.

The explosion on Thursday happened near Weheliye hotel on the busy Maka Al-Mukarrama Road.

A spokesman for the Somali interior ministry confirmed the death toll to Al Jazeera, adding that 10 others were wounded in the blast.

There was no immediate claim of responsibility, but the al-Shabab armed group is frequently carrying out attacks in and around the capital.