You are here: Home / MidEastGulf / Deadly clashes between Jund al-Sham and the Fatah organisation in south Lebanon refugee camp 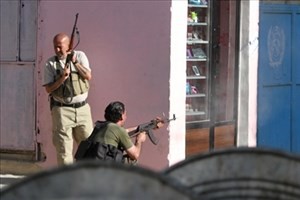 Two people have been killed in clashes between armed groups in a Palestinian refugee camp near Lebanon’s southern port city of Sidon.

A Palestinian official, who spoke on condition of anonymity to the AFP news agency, named the two killed in the Ain al-Hilweh camp as Talal Maqdah, a member of Palestinian President Mahmoud Abbas’ Fatah movement, and Diab Mohammad, a juice seller.

He said another six people were wounded in the clashes late on Tuesday, including one man who was in critical condition.

“Armed men began shooting at two members of Jund al-Sham, and there was an exchange of fire between Jund al-Sham and the Fatah organisation,” the official said.

He said the six wounded individuals had been specifically “targeted”.

“The situation is very tense, and there are dozens of armed men spread out in the streets,” he added.

Dozens of Palestinian families, including some who had sought refuge in the camp after escaping violence in Syria, fled the camp during the clashes.

By 11pm, the fighting had lessened in intensity to intermittent bursts of gunfire.

The violence came three days after Fatah official Talal al-Ourdoni was shot dead by unidentified attackers while walking through the same camp.

Ourdoni headed a division within the Palestinian national security service in Ain al-Hilweh, the largest of Lebanon’s refugee camps.

Most Palestinians live in squalid conditions in the country’s 12 official camps.

The Lebanese army does not enter the camps, under a tacit deal agreed after the 1975-1990 civil war. Palestinian factions are responsible for security.

Ain al-Hilweh has become the scene of score-settling between several factions, and a breeding ground for armed groups that have flourished on the back of the poverty afflicting the camp.