You are here: Home / MidEastGulf / Deadline in doubt in tense Iran nuclear talks 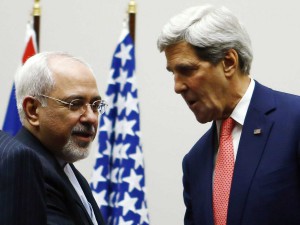 Iran and the US admitted during tense talks Sunday they are highly likely to miss a looming deadline to nail down a historic nuclear deal as they struggled to overcome major differences.

Officials in Vienna said however that Tuesday’s target date would only be missed by a few days, with Iran saying there was “no desire or discussion yet” on a longer extension.

A senior US official would not go as far as to say there was no chance of meeting the deadline, but said “it’s fair to say the parties are planning to stay past the 30th to keep negotiating.”

Iranian Foreign Minister Mohammad Javad Zarif meanwhile was set to return to Tehran for consultations, officials said, although the US official said this was not a matter of concern.

British Foreign Secretary Philip Hammond said as he joined the talks with US Secretary of State John Kerry and other foreign ministers that the six powers were prepared to walk away.

“No deal is better than a bad deal. There are red lines that we cannot cross and some very difficult decisions and tough choices are going to have to be made by all of us,” Hammond told reporters.

EU foreign policy head Federica Mogherini said “political will” was still needed to get a deal after almost two years of intense diplomatic efforts to resolve the 13-year-old standoff.

“It is going to be tough, it has always been tough but not impossible,” Mogherini told reporters.

Iran and the P5+1 group — Britain, China, France, Germany, Russia and the United States — are seeking to flesh out the final details of an accord that builds on a framework deal reached in Lausanne in April.

Netanyahu warning
It is hoped a deal would end a standoff dating back to 2002 which has threatened to escalate into war and poisoned the Islamic republic’s relations with the outside world.

But it must stand up to intense scrutiny by hardliners in Iran and the United States, as well as Iran’s regional rivals Israel, widely assumed to have nuclear weapons itself, and Saudi Arabia.

“It is still not too late to go back and insist on demands that will genuinely deny Iran the ability to arm itself with nuclear weapons and prevent it from receiving vast sums to finance its aggression, its spreading out and the terrorist onslaught,” Israeli Prime Minister Benjamin Netanyahu said Sunday.

According to the Lausanne framework, Iran will slash the number of its uranium enrichment centrifuges, which can make nuclear fuel but also the core of a bomb, shrink its uranium stockpile and change the design of the Arak reactor.

In return it is seeking a lifting of a complicated web of EU, US and UN sanctions which have choked its economy and limited access to world oil markets.

But tough remaining issues include the timing and pace of this sanctions relief and UN access to Iranian military bases to investigate any suspicious behavior.

French Foreign Minister Laurent Fabius said that this was one of three key conditions for a deal that were “not yet accepted by all parties.”

“In recent days it has become obvious that when it comes to the question of how… we can be sure that what we agree really is adhered to, there has been some discussion,” German Foreign Minister Frank-Walter Steinmeier told reporters.

“We left base camp a long time ago. We are now at high altitude with the summit before us. The cross on the summit is in sight. We have to hope that there is now no bad weather.”