You are here: Home / MidEastGulf / Davutoglu: Turkish forces will remain in Iraq until Mosul is liberated

The Iraqi government and the Arab League called the Turkish government to withdraw its soldiers from Northern Iraq quickly and unconditionally. 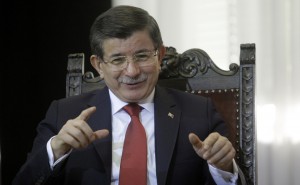 Turkish government insists that Turkish troops must remain in Northern Iraq until Mosul, the Iraqi major city, is liberated.  The second largest city in Iraq, is under Daesh control since June 2014.

Turkish daily, Hurriyet, reported that Turkish Prime Minister Ahmet Davutoglu criticised the Iraqi government and the Iraqi forces of failing to take effective measures against Daesh in Mosul. Therefore, he said that the Turkish forces must remain in foreign soil to help Iraqi forces liberate Mosul.

According to Hurriyet, Davutoglu said in a televised address to the nation late on December 27: “In line with appeals from the Iraqi authorities, we are providing training and equipment support to both the Peshmerga and local volunteers from Mosul…Our support will continue until Mosul is liberated.”

“The basic goal of the troops that we additionally sent to the region is to better protect our trainees on duty against Daesh and Mosul’s people,” the Turkish PM said and added. “As long as the threat of terror remains, we will continue to be on full alert in a way that will not endanger our presence there in any way.”

Even though Davutoglu claims that the Iraqi government asked for the Turkish military support, the government of the war-torn country repeatedly called Turkey to withdraw its forces from its ground.

The first request for the removal of the Turkish forces from Northern Iraq came on December 4, when Turkey deployed additional military to the Bashiqa camp, which lies near Mosul. The move angered the Iraqi government, which says that Turkey violates Iraqi sovereignty. The government requested from the United Nations Security Council, to use its veto power to force Turkey to pull its troops from Iraq. Turkey partly withdrew its forces from Northern Iraq, but Baghdad wants a full withdrawal.

The Iraqi government persuaded the Arab League and on 25 December the League called on Turkey to immediately withdraw its soldiers from northern Iraq.

Qatar based Al Jazeera reported that the Arab League’s statement was unexpected, as Iraq and the Arab Gulf states are on opposite sides of the wars in Syria and Yemen.

Marwan Kabalan, researcher at the Doha Institute for Graduate Studies, told Al Jazeera that the Arab League’s statement indicates that the Arab states worry about Turkey’s growing influence in the region.

“They believe Turkey has been supporting Islamist groups to increase its regional power. But there is also no love lost between Iraq and the Arab Gulf states; they still have concerns that Iraq is moving into the Iranian orbit,” Kabalan said.