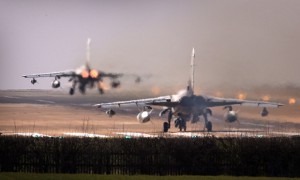 The Prime Minister set out his case for the extension of RAF airstrikes from Iraq into Syria in a written response to a parliamentary committee which had urged caution over the move.

Mr Cameron acknowledged that airstrikes alone will not be enough to defeat IS – also known as Isil, Isis or Daesh – but said they would help to degrade the group’s military capability and halt its advance.

He rejected the idea that joining the US, France and other nations in bombing IS in its Syrian strongholds would put Britain at risk of Paris-style terror attacks, saying that the threat to the UK was already “very high”.

And he told the House of Commons Foreign Affairs Committee: “One thing is clear: the threats to our interests and to our people are such that we cannot afford to stand aside and not to act.”