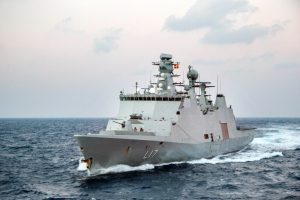 Danish naval patrol forces onboard the frigate Esbern Snare have killed four pirates and wounded a fifth in an exchange of fire in the Gulf of Guinea off the coast of Nigeria.

The Frogman Corps fired warning shots but was subsequently shot at, prompting the Danish soldiers to engage in a shootout, which resulted in the deaths of four pirates and one injured. The remaining four pirates were taken on board the frigate, and no Danish personnel were hurt in the incident.

The Esbern Snare was deployed last month to the Gulf of Guinea amid increased security risks from pirates. The Gulf of Guinea has been one of the world’s hot spots for piracy and armed robbery over the last decade. However, according to data on the IMO Global Integrated Shipping Information System (GISIS) these incidents have significantly fallen in the first three quarters of 2021.

“We have always said that the Gulf of Guinea is the world’s most dangerous water, and the situation of last night stresses the seriousness of the situation here. There is definitely a need for the presence of the Danish soldiers, and even though it may sound tough: piracy comes with a price,” said Anne H. Steffensen, CEO of Danish Shipping, who is currently in Ghana with the Danish prime minister to visit the deployed soldiers with Esbern Snare.