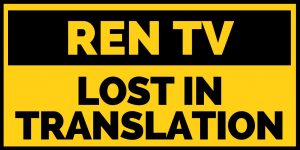 A Russian television correspondent sneaks into the Salisbury hospital where Sergei Skripal is being treated from his poisoning. As he approaches the door that allegedly leads to Mr Skripal’s ward, the correspondent addresses his audience in Russian: “It’s securely closed. And here’s a sign: ‘No entry – keep your distance’. It’s the only protection from this lethal substance England is saying is Novichok”, like reported by euvsdisinfo.eu.

The problem is, however, that the English sign in fact says: “Danger: Slippery Floor Surface!”

The habit of lying

When you work for a disinformation-oriented outlet like the TV channel in question, the Russian nationwide REN TV, spreading factually wrong information can become so habitual that you don’t care about the risks. It does not matter to you anymore that large portions of your audience speak English well enough to immediately be able to debunk your lie. What matters is to make claims that support your story.

REN TV is one of Russia’s largest TV stations and well known for spreading disinformation. One example of REN TV’s work we have covered is the story where Ren TV claimed that being gay is a mental disease; that same-sex marriage is not much different from someone marrying your dog; that gay politicians in Europe force children to change sex and that all this is organised by a business lobby and the world’s billionaires in order to rule the world via corporations. To an outlet that disseminates such stories about European societies, changing the meaning of a sign on a door is perhaps not a big deal.

Mistranslation as a disinformation tool

Click below to watch the clip from REN TV with the mistranslated sign on the hospital door, provided and subtitled in English by The Daily Mirror.