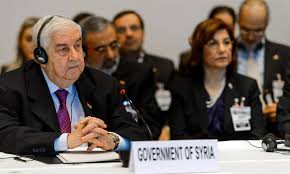 Syria’s government told a U.N. envoy on Saturday it was ready to take part in Geneva peace talks scheduled for Jan. 25 but said it wanted to know which opposition figures would participate.

The Geneva talks are part of an international bid to end the five-year conflict that has killed an estimated 250,000 people. The plan for a hoped-for ceasefire envisages defining “terrorist groups” in Syria, one of the toughest issues facing diplomats.

The Syrian government views all the groups fighting to topple President Bashar al-Assad as terrorists, including rebels represented in a recently formed opposition council tasked with overseeing the negotiations.

Syrian rebels and opposition politicians have expressed doubts over whether the peace talks will begin as planned. Earlier this week, they told de Mistura that first the Syrian government must stop bombing civilian areas, release detainees and lift blockades imposed on opposition-held areas.

The outlook for the talks has been further clouded by increased tensions between Saudi Arabia and Iran, which back opposing sides in the conflict. Tensions have risen since Saudi Arabia executed Shi’ite cleric Nimr al-Nimr.

Moualem told de Mistura “Syria is ready to take part in the Geneva meetings at the proposed time, confirming the necessity of obtaining the list of terrorist organisations and the list of names of the Syrian opposition groups that will take part”, state media reported.

Opposition leaders are voicing misgivings over the new effort endorsed by the U.N. Security Council, not least because it does not address Assad’s future, a point of contention between states on either side of the war.

Syrian rebels said on Friday there was global pressure on the opposition to make concessions that would prolong the war, adding to their doubts about the U.N.-led drive.

One opposition official said the negotiating team would not be named before the Syrian government did so. Monzer Mahkous, representative of the opposition in Paris, said it was not certain the talks would go ahead as planned due to numerous unresolved issues.