You are here: Home / MidEastGulf / Damascus has a plan if Turkey attacks East Euphrates 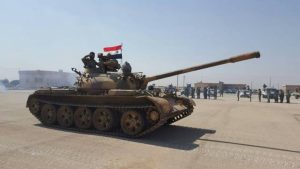 The Syrian regime is planning to exploit a possible military confrontation between Turkish army and Kurdish People’s Protection Units (YPG) in east Euphrates to attack Qamishlo and Hasakah, a source said according to basnews.com.

Turkish President Recep Tayyip Erdogan threatened on Tuesday to launch a large-scale operation “in the near future” to remove the Syrian Kurdish forces from east Euphrates in northern Syria.

“We are ready to destroy the terrorist structure east of the Euphrates. We have completed the preparations for this issue. In the near future, we will drive the terrorist organization into a corner through a large-scale and efficient operation,” Erdogan said yesterday.

A source with knowledge on the issue from the Syrian Kurdistan, told BasNews that the Syrian regime has, in the past two weeks, sent large reinforcement to Qamishlo airport in preparation for the new possible developments.

He claimed that the Syrian regime is planning to exploit the Turkish possible attacks on Gire Sipi and Kobani to move its forces and take control of Hasaka and Qamishlo back from the YPG.

Asked about the position of the US-led Coalition who are present in the area and assisting the Kurdish forces in their battle against the Islamic State (IS), the sources said that the Coalition has not yet made its position clear in this war of words.

According to the source, the Kurds are generally concerned over Coalition’s silence similar to their indifference once Ankara attacked Afrin earlier this year.