You are here: Home / Europe / Dagestan, 7 dead in clashes between Police and Islamic militants in Russia 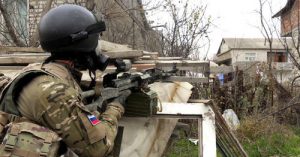 The National Anti-terrorism Committee’s spokesman, Alexander Polyakov, said two suspects holed up in a building in the town of Khasavyurt near Chechnya and died in a gunbattle that erupted after they refused to surrender. Two law enforcement agents also were killed, he said.

In a separate clash in the town of Kaspiysk on the Caspian Sea, two men armed with knives attacked three police officers, killing one and wounding another before the third officer shot the assailants to death, authorities said.

Police spokesman Ruslan Ibragimgadzhiyev said the attack occurred when the officers stopped to refuel their vehicle at a gas station. A flag bearing symbols of the Islamic State extremist group was found at the site of the attack, he said.

The police spokesman said the teenage attackers worked at a local factory, and one of them had been known to police for his radical views.

Dagestan is a mostly Muslim region between Chechnya and the Caspian Sea, and it has been a breeding ground for Islamic militants who mount regular attacks on police and officials. Some of the militants have sworn allegiance to the Islamic State group, and hundreds of local residents have joined the IS in Syria and Iraq.

Russia fought two wars against separatists in the neighboring province of Chechnya after the 1991 breakup of the Soviet Union.