You are here: Home / West Asia / Daesh’s last base destructed in eastern Afghanistan 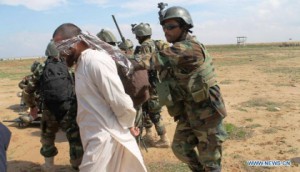 Afghanistan security officials in fresh media conversation reported the situation in some unstable regions of the country’s eastern zone, quiet calm after successfully launching anti-Daesh’s militants offensives.
They said more than one thousands of rebels with Daesh loyalty have been killed and a rough number of the questionably-designed group’s members wounded or detained in Achin—one of the eastern province of Nangarhar’s districts, with the main extremists’ training centers and strongholds reported to be on alert for attack against the government’s security posts. Achin, a partially remote district but near the border with the neighboring Pakistan, has recently turned turbulent, after the so-called Islamic State (IS), with main bases in Iraq and Syria influenced it, through the neighboring Pakistan’s border. The militants entered fierce clashes with the security forces, despites repeatedly facing defeats.
Daesh’s members took a step forward, by denouncing, even Muslims’ mini-error concerning to the holy religion, a conversion to infidelity and moreover, under their own made local court, not to spare to kill anyone who has been believed to work for the government or at least support the central and elected system. Anything, on their perspective have been set apart illegal and against the Islamic teachings, perhaps recommending a death to those withstanding their decisions; even against Islam. Killing innocents, including women and children and destroying their houses, behaving wrong with the other religious scholars out of their ranks, were not something representing the core Islamic teachings or aims, but what only demonstrating their fierce and anti-humanity acts.

The militants didn’t hesitate to even behead children among those, the brutal group’s individuals have kidnapped in some insecure areas of the country. As approved [honesty is the best policy], ultimately, the Daesh’s anti-Islamic trend could not reach to the target and finally went in vain, with over one thousand of their members killed in the security forces’ counterterrorism campaign, while a series of fierce clashes erupted between the Taliban and Afghanistan’s IS resulted in numerous subordinates from the two sides death and injury.
According to reports, the latest Daesh’s fighters have either been killed or fled the main stronghold, recently established in the Achin district, where the terrorist leaders in telephone talks with some international media, like BBC underestimated what they have earlier assumed as the core Islamic teachings when inside the Taliban ranks. How to adjudicate their remarks; sometime being weak Muslim and sometime the strong one: when, within the Taliban, they, perhaps were not aware of the main Islamic teachings, but, after allegiance to the Daesh’s strict, they found the main target of what they might have reached in the past.

This is something ridicules, a change in the “eternal Islamic” religion, has never been still taught in no time, and nowhere, but, they wanted a change in the holy religion, when wanting a change in their minds. Many of the holy Islamic teachings have, however been based on the ongoing condition considering accepted tradition, in case the procedure don’t harm the main decrees and values.
So, the Islamic Republic of Afghanistan, with a wise leadership to distinguish between the main Islamic foe and friends and a strong security force would do its best to use the last alternative for repressing terrorists and in cooperation with the religious scholars would publicize the main feature of Islam to regional and world nations. There is a need for help from both the Afghanistan neighboring countries and those of of the region and the world—the international community, particularly the US and its NATO ally, not to spare honest cooperation to the war-battered nation, while the Islamic Republic is on the new phase of both imposed war and peace process with the moderate Taliban and other armed opposition groups respecting the country’s constitution and abiding by the human rights laws.

The prudent and sober people of Afghanistan should also use their intellect and power of knowing to stay alongside their security forces, by providing them with any information about any suspected signals and support them with all their best to rescue the life of innocents and prevent destruction of the country.