You are here: Home / MidEastGulf / Daesh’s emergence in Yemen makes it a two-front war 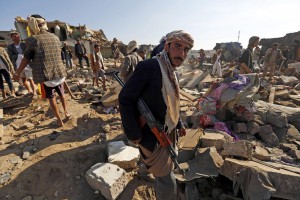 A UAE paper has said that Daesh is making its presence felt in Yemen with a series of attacks on coalition troops and government officials.

“This is not a new phenomenon. There have been several attacks in the year which have been ignored as the Arab coalition intensified its campaign against the Houthi rebels backed by Iran. It also points to the fact that Daesh is recruiting followers from Al Qaeda in the Arabian Peninsula, which is based in Yemen,” said Khaleej Times in an editorial on Monday.

“The death on Sunday of the governor of the southern port city of Aden, Jaafar Saad, in a car bomb attack claimed by Daesh, should not divert the focus from the war to oust the Houthis from their strongholds. Aden is controlled by the coalition but there remain pockets of militant influence like in the Tawahi district.

“The assassinated governor was believed to be close to President Abd Rabbo Mansour Hadi. His death will be a blow to the Arab coalition’s efforts to secure the city after it fell two months ago.

“Government efforts to reassert control over the city have been hit. It could also slow down humanitarian work undertaken by the UAE in the area. Roads and health facilities are being built, and government and coalition troops have to throw in reinforcements to ensure more attacks do not occur during the next phase of the campaign.

“Dr. Anwar bin Mohammed Gargash, Minister of State for Foreign Affairs, said the ‘treacherous’ deed would not go unpunished. He said operations against the militants would continue. The offensive is likely to diversify against the new enemy, Daesh, which is swiftly taking over territory ceded by Al Qaeda.

“These crimes will not discourage our common resolve to restore security and stability throughout the brotherly nation of Yemen,” said Dr. Gargash.

“The Houthi terrorists, meanwhile, are dragging their feet over talks. They see themselves in a better position to bargain for the spoils of war as the coalition trains guns on the city of Taiz and troops have their eyes set on Sanaa, the capital.

“Aden has to be secured to free up coalition troops in their push for Sanaa in the north. Gulf and Arab coalition efforts should speed up training for the Yemeni police, a task led by the UAE. Daesh should not be allowed to sneak in. The war is now being fought on two fronts against different enemies – and it’s getting increasingly complex,” concluded the Dubai-based daily.