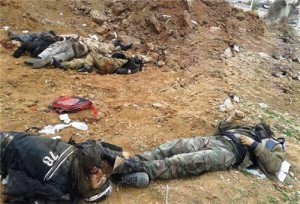 Daesh’s self-proclaimed governor of the district of Heet in Iraq’s restive province of al-Anbar has been killed by unidentified gunmen in an operation, a security source says.

An Iraqi security source in al-Anbar, speaking on condition of anonymity, was quoted by IraqiNews as saying on Tuesday that the Daesh self-declared governor of Heet, known as Abu Talha, was killed in the district by the unidentified gunmen, equipped with weapons with silencers.

The source stressed that Abu Talha was “a Saudi national.”

“The operation is the first of its kind to penetrate the militant group inside Heet,” located almost 70 kilometers west of the provincial capital, Ramadi, the source said.

Elsewhere, in an operation by Iraqi forces in the eastern Iraqi province of Diyala, a special Iraqi security unit conducted a tactical operation on Hamrin Hills, killing a senior leader of Daesh, an Iraqi national known as Abu Saleh, a security source, speaking on condition of anonymity, said.

The Iraqi forces managed to detain two of aides of the Daesh leader in the area, located almost 75 kilometers northeast of the provincial capital, Baqubah.

“The operation was based on intelligence received by the security forces,” the source added.

Also, in Iraq’s restive province of Salahuddin, the Iraqi federal police forces carried out an attack against a Daesh military site in the area of al-Fatha in the district of Baiji, killing five snipers and three mortar launchers belonging to the group, Iraq’s Interior Ministry spokesman Major General Saad Moen said.

The northern and western parts of Iraq have been beset by the scourge of Daesh’s terrorism ever since the militants launched an offensive in June 2014, and took control of portions of Iraqi territory. Iraqi government forces and volunteer fighters are seeking to win back militant-held regions in joint operations.