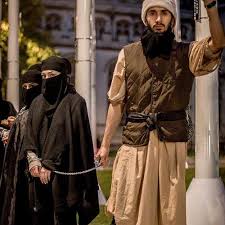 Daesh has published an article urging women not to be jealous of their husband’s sex slaves in its weekly magazine al Naba.

The article argued that women’s bad feeling were thanks to a lack of awareness about religious rules and “blind jealousy”, and that this prompted them to treat the women badly, beating them.

“They are bragging about living under Khilafah, while they are away from having justice in their own houses,” the article, which was reported on news website Arabi 21, said. “They are not fair toward those whom you own as slaves that God put under their care and guidance.”

The article went on to quote religious verses which it said argued for the good treatment of slaves.

It did not discuss the ethics of actually keeping slaves for sexual purposes, however; nor did it comment on the reasoning behind demanding women respond with equanimity to a system that classifies them as the property of a single man.

“Some women are upset of their husbands, because he gave the slave an independent house,” the article added. “Such woman should know that if the wife was good to him and his slave, he would feel comfortable in his house, and so they will all stay living together.”

Women abducted and kept prisoner as sex slaves under Daesh have described devastating ordeals, in which rape, torture and sexual violence is everyday. Reports from Amnesty International say young girls have at times killed themselves rather than remain as sex slaves.