You are here: Home / MidEastGulf / Daesh under pressure as troops advance on Palmyra, Mosul 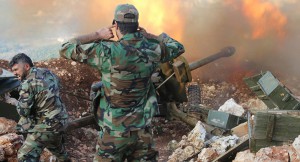 Syrian troops on Thursday entered the ancient city of Palmyra and Iraqi forces launched an offensive against Mosul as pressure mounted on key strongholds of the Daesh, the so-called Islamic State for Iraq and the Levant (Isil), group.

US Secretary of State John Kerry, meanwhile, held talks with Russia’s President Vladimir Putin and agreed to push for a political settlement in the war-torn country, but the future of its Moscow-allied leader Bashar al-Assad remains a sticking point.

Unless Assad agrees to step down, there are concerns that the Syrian opposition could drop out of peace talks in Geneva, which UN envoy Staffan de Mistura said he was aiming to restart on April 9.

Backed by Russian warplanes and allied militia on the ground, the Syrian army advanced into Palmyra after launching a desert offensive early this month, said the Syrian Observatory for Human Rights.

The defence ministry in Moscow said Russian aircraft carried out 146 strikes on “terrorist targets” in the Palmyra area between Sunday and Wednesday, killing 320 “terrorists” and destroying six command posts and two ammunition dumps.

Daesh overran Palmyra – known as the “Pearl of the Desert” – last May and it has since blown up UNESCO-listed temples and looted relics that dated back thousands of years.

“Regime forces have entered the Hayy al-Gharf neighbourhood in the southwest of Palmyra. They are advancing very slowly because of mines planted by Daesh,” Observatory director Rami Abdel Rahman said, adding troops were also advancing from the north.

‘Nightmare is nearly over’

Palmyra’s recapture would be a major strategic and symbolic victory for Assad, since whoever holds it also controls the vast desert extending from central Syria to the Iraqi border.

A Syrian military source said the army had entered Palmyra from the northwest after seizing control of part of the historic Valley of the Tombs.

“The clashes, which are ongoing, are fierce,” he told AFP.

IS had earlier urged civilians to flee the city, where about 15,000 of its 70,000 original residents remained after the jihadist takeover.

“I am so happy that the liberation is imminent… before the total destruction of the ancient city,” he said.

“For one year, Palmyra has been a symbol of the cultural cleansing plaguing the Middle East,” Bokova said.

Across the border, Iraqi forces announced the start of an offensive to retake the second city of Mosul, Daesh’s main hub in Iraq.

The army and the Popular Mobilisation paramilitary force “have begun the first phase of conquest operations” in the northern province of Nineveh, of which Mosul is the capital, Iraq’s joint operations command said.

It said four villages had been taken between the town of Qayyarah, which is held by IS, and Makhmur, where US-backed Iraqi forces have been massing.

Experts have warned any battle to retake Mosul would be difficult, given the significant number of jihadists and civilians in the city and the time IS has had to prepare defences.

At the US-Russia talks in Moscow, some consensus appeared to be achieved over a framework and timeline for a political transition.

“We agreed on a target schedule for establishing a framework for a political transition and also a draft constitution, and the target is August,” Kerry said at a joint news conference with Foreign Minister Sergei Lavrov after the talks.

Lavrov told journalists that Moscow and Washington would now step up efforts to get the Syrian regime and opposition to hold “direct talks” in Geneva, where a round of negotiations that saw a United Nations mediator shuttle between the delegations concluded on Thursday.

But Kerry appeared to back away from comments made before the meeting that suggested he would sound out the Russian leader about pressuring his ally Assad to step aside.

“Russia will have to speak for itself as what it’s going to choose to do in order to help Mr Assad make the right decisions,” he said.

“This is a unique moment, a precious moment and we hope Russia will seize this moment and use its leverage,” High Negotiations Committee spokeswoman Bassma Kodmani said.

Assad’s future has been a key obstacle in the latest talks, with the government insisting any discussion of him leaving is “excluded” and the opposition saying any talk of allowing him to stay is “absolutely unacceptable”.