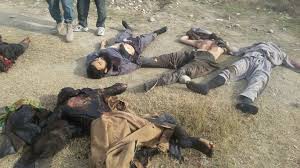 Six militants have been killed and 10 others wounded in a clash erupted between two rival insurgent groups in eastern Nangarhar province.

Spokesperson for the police headquarters of Nangarhar province said the clash erupted between fighters of Taliban and Daesh in Karkani area of Achin District yesterday.

According to Colonel Hazrat Hussain Mashriqiwal, five of the militants killed were loyalists of Daesh and the other one was from the Taliban group.

Seven of the 10 wounded belonged to Daesh and three to Taliban.

Nangarhar has become the battle ground of Taliban and Daesh where they have announced ‘Jihad’ against each other.

Loyalists of Daesh are former members of Taliban. They separated ways with Taliban after the Islamic State (IS) militant group which is also known by its Arabic name ‘Daesh’ came into shape.

The two sides have fought in a number of Afghan provinces but the most deadly clashes have been erupting in Nangarhar province.

Achin, Haska Meena and Bati Kot are among the districts of Nangarhar where both sides have killed/beheaded dozens of each other’s fighters.

Due to the tense situation and continued clashes between the two groups, hundreds of families have been forced to leave their homes in those areas.