Daesh terrorists have captured 11 localities in the north of the Aleppo province near the Turkish border, local media reported Monday. 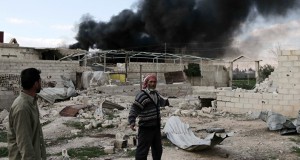 According to the Al Mayadeen broadcaster, the localities were under control of the Free Syrian Army.Meanwhile, the Syrian government forces have repelled an assault of terrorists on a locality in the south of the Aleppo province, adjacent to the Damascus-Aleppo highway.

On Sunday, a military source said the Syrian government army had repelled a joint attack by several terrorist groups on the outskirts of the settlement of Berna near the city of Aleppo. Government forces repelled another militant attack in the Khan Tuman settlement near Aleppo, while the Syrian city’s residential quarter of Saif Dawla was shelled by terrorists, according to the source.