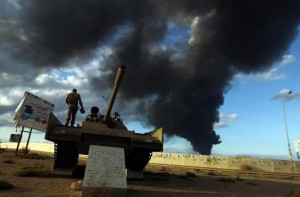 The militants resumed selling near the country’s oil port of Es Sider on Tuesday, targeting an oil storage tank, a petroleum guards spokesman and the National Oil Corporation said.

The unnamed guards spokesman said that the militants were 30-40 kilometers (19-25 miles) from the port, which was hit by militants the previous day.

The Monday attack had left seven guards dead and 25 others wounded.

The spokesman said that in the nearby oil port of Ras Lanuf, a fire at an oil tank, which was targeted by militants on Monday, had been mostly contained but was still burning.

The militants are said to have been pushed back, but Daesh says it now controls Bin Jawad, 30km (19 miles) west of Sidra on the road from its stronghold in Sirte.

Daesh has carried out several attacks over the past few weeks to move forward to Libya’s oil terminals such as al-Sidra and Ras Lanouf.

In December 2015, UN experts said in a report that there are between 2,000 and 3,000 Daesh militants in Libya. They also said Daesh poses “an evident short and long-term threat in Libya” since it regards the country as the “best” opportunity to expand its militancy.

Chaos has gripped Libya since 2011. The country has also recently become a hotbed for the activities of Daesh operating in Syria and Iraq.