You are here: Home / West Asia / Daesh restricted in Afghanistan 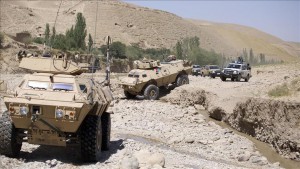 The U.S. air campaign and joint operations with Afghan forces have contained Daesh to a few districts, a Pentagon official said Thursday.

“From the first of January until the 31 of March, U.S. forces took just under 100 counterterrorism strikes. The majority of those, probably between 70 and 80, were focused on Daesh,” Army Brig. Gen. Charles Cleveland said via video conference from Kabul.

The spokesman for the NATO-led Resolute Support Mission in Afghanistan told reporters that the U.S. military estimates that Daesh controlled six to eight districts in Nangarhar province a few months ago but now it is believed to control two to three districts.

The general did not say if American commandos were close to the frontlines during the operation.

“It was really about a 36-hour operation, maybe a little bit less,” he said, noting that U.S. airstrikes also helped the operation from the air.

According to Cleveland, Daesh militants, being pressed from northern Nangarhar province, are trying to move into either Kunar or Nuristan provinces to the north — along the Pakistani border — or Ghazni province further south.

“We don’t think they’re moving because they’re able to expand, because they’ve got additional capacity. What we think is that they’re trying to survive,” he said.

He also claimed that some Daesh fighters are defecting either to the Afghan government or back to the Taliban.