You are here: Home / Mediterranean / Daesh puts up a billboard on women’s dress code in Libya 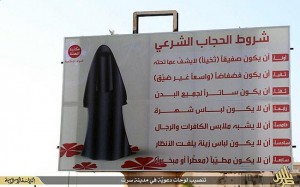 Several reports have come out about Daesh (ISIS) imposing restrictions on women since it took over parts of Syria and Iraq. Billboards, however, are a first.

Al-Wasat reported on Monday the militants put up a billboard in Sirte, Libya, outlining the dress code for women and including an illustration in case you had forgotten that you’re not supposed to resemble a human at all.

3. Must cover all body parts

5. Do not wear masculine items or items worn by faithless women

6. No clothes with designs that will attract attention

Women in previous reports on Syria and Iraq have complained about not being able to breathe under the Daesh-imposed burka, through which they’re not allowed to expose eyes or mouths.

But even with the dress code in place that essentially turns women into bulky, moving black sheets, ladies aren’t allowed in public during Ramadan during the day. After Iftar they may be accompanied by a male family member outside, though that’s also discouraged.

Our guess is the extremists haven’t had very many interactions with women. Otherwise they’d know the skin on their wrists won’t blind them and, in fact, doesn’t look much different from a man’s wrist. Should someone tell them women aren’t vampires, and that their skin doesn’t sparkle in the daylight?